Why do some plants grow into large woody shrubs or colossal trees, while others remain small and never produce wood in their stems? It’s an evolutionary puzzle that already baffled Charles Darwin more than 160 year ago. Now, scientists from the Netherlands and Germany present the first global overview of woodiness evolution on islands, which will finally help solve the puzzle.

“The first woody trees evolved on Earth some 400 million years ago, but still we know so little about why they developed wood in the first place”, Frederic Lens tells, researcher at Naturalis Biodiversity Center and Leiden University. All these early woody trees are now extinct and originated in unknown climatic conditions, so it is impossible to understand the evolution of woodiness based on their fossils, but Islands may offer the solution.

The evolution of woodiness is still happening today, particularly in these areas that are known as natural laboratories of evolution: islands. One of the striking aspects of insular floras is that they are proportionally more woody than those of adjacent continents. Charles Darwin described this phenomenon as insular woodiness. It occurs when a non-woody continental coloniser reaches an island, and subsequently evolves into a woody shrub or even tree on the same island after tens or hundreds of thousands of years.

Insular woodiness is only known from a few iconic lineages, like the Hawaiian silverswords (Fig. 2). To better understand why plants became woody during evolutionary history, the Dutch-German research team compiled a new database comprising over a thousand insular woody species and their distribution (Fig. 2), which allowed them for the first time to rigorously test a number of existing hypotheses. And with promising results; “We identified a link between increased drought and increased wood formation in plant stems on islands. I am convinced that the link between drought and woodiness will be even much stronger on continents”, Lens tells. This is something the team wants to test soon when  analysing their complete database, including also about 6000 additional woody species that evolved their woodiness on continents.

The researchers identified not only all insular woody species in the world, they also globally mapped their distribution and number of transitions (Fig. 3), and tested which of the evolutionary hypotheses are most likely. “It was really crazy to compile such a dataset in the first place”, Frederic Lens says. “It took me more than 10 years to finalise the database, but fortunately, it all paid off in the end”.

The new woodiness database found more than three times as many insular woody species known so far. These 1000+ species are the result of at least 175 independent transitions. “This clearly emphasises that islands are remarkable  biodiversity hotspots in the world, with a unique flora that urgently needs protection”, first author Alexander Zizka, of University of Marburg in Germany, states. The extensive research also offers an interesting glimpse into the future. “With the dry European summer of 2022 in mind, the fact that drought pops up as one of most likely drivers of wood formation, offers promising research avenues in agriculture to help safeguard our food production,” Frederic Lens clarifies. “Suppose we would be able to turn every non-woody crop into a woody crop, we will not only have larger crops with a higher yield per plant, but more importantly, we will also be able to increase the drought tolerance of these woodier crops. In a world facing climate change and a growing global human population, this is simply essential.”

The leading researcher, Dr. Frederic Lens, can be reached at frederic.lens@naturalis.nl. General questions can go to the Naturalis press office: communicatie@naturalis.nl or +31 (0)6 35112999.

Additional images can be found in this press kit. Credits are indicated in the file names.

The evolution of insular woodiness 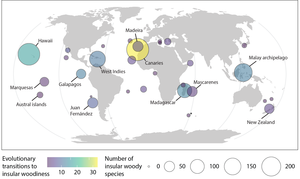