CORVALLIS, Ore. – A new study led by Oregon State University suggests leaves in forest canopies are not able to cool themselves below the surrounding air temperature, likely meaning trees’ ability to avoid damaging temperature increases, and to pull carbon from the atmosphere, will be compromised in a warmer, drier climate.

The findings by an international collaboration that included researchers from multiple universities and government agencies contrast with a prevailing theory in the scientific community that canopy leaves can keep their temperature within an optimal range for photosynthesis – the process through which green plants make their food from sunlight and carbon dioxide.

Published today in the Proceedings of the National Academy of Sciences, the research is important for understanding and predicting plant responses to climate change, said lead author Chris Still of the OSU College of Forestry, who notes that multiple studies suggest many of the world’s forests are approaching their thermal limit for carbon uptake.

“A hypothesis known as limited leaf homeothermy argues that through a combination of functional traits and physiological responses, leaves can keep their daytime temperature close to the best temperature for photosynthesis and below what is damaging for them,” said Still. “Specifically, leaves should cool below air temperature at higher temperatures, typically greater than 25 or 30 degrees Celsius. That theory also implies that the impact of climate warming on forests will be partially mitigated by the leaves’ cooling response.”

Still and collaborators used thermal imaging to look at canopy-leaf temperature at numerous well-instrumented sites in North America and Central America – from Panamanian rain forest to the high-elevation tree line in Colorado – and found that canopy leaves do not consistently cool below daytime air temperatures or remain within a narrow temperature range as predicted by the limited leaf homeothermy theory.

The thermal cameras were mounted on towers equipped with systems that measure carbon, water and energy “fluxes” – exchanges between the forest and atmosphere – as well as a host of environmental variables.

“Using high-frequency, continuous thermal imaging to monitor forest canopies really changes what we can learn about how forests are dealing with the stress of rising temperatures,” said Andrew Richardson, a professor at Northern Arizona University and a co-author of the study. “Before thermal cameras, if you wanted to measure canopy temperature you had to stick thermocouples to leaves with Band-Aids and wait until the wind pulled them off. But these cameras let us measure change 24 hours a day, seven days a week, across many seasons and years.”

The study showed that canopy leaves warm faster than air, are warmer than air during most of the day and only cool below air temperature in mid- to late-afternoon. Future climate warming is likely to lead to even greater canopy leaf temperatures, which would negatively impact forest carbon cycling and enhance forest mortality risk, the scientists say.

“Leaf temperature has long been recognized as important for plant function because of its influence on carbon metabolism and water and energy exchanges,” Still said. “If canopy photosynthesis declines with increasing temperature, the ability of forests to act as a carbon sink will be reduced.”

Leaf temperature in different habitats is affected by how leaf size varies with climate and latitude as well as canopy structure, Still explains. Large leaves occur primarily in warm and wet climates, and leaf traits like higher reflectance and smaller sizes, which enhance the ability to shed heat and lead to greater cooling, occur mainly in plants growing in hot, dry areas.

In much of the warm, wet tropics, leaf temperature is already approaching or surpassing thresholds for positive net photosynthesis – the carbon fixation rate minus the rate of carbon dioxide lost during plant respiration.

“If leaves are generally warmer than the surrounding air, as our findings suggest, trees may be approaching critical thresholds of temperature stress faster than we expect,” Richardson said.

“Our results have big implications for understating how plants acclimate to warming, and they suggest a limited ability for canopy leaves to regulate their temperature,” Still added. “Our data and analyses suggest a warming climate will result in even higher canopy leaf temperatures, likely leading to reduction of carbon assimilation capacity and eventually heat damage.” 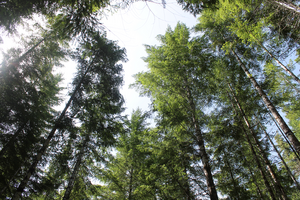