From the deepest oceans to the highest mountains, human-caused climate change is making a profound impact on animals and plants around the world, with many species pushed to the brink of extinction by rising temperatures.

From bears to moose to lynx, and even squirrels and frogs, animals are leaving their homes in search of cooler climates as the planet warms. In fact, roughly half of the world’s 4,000 species are on the move, with many migrating northwards towards higher latitudes.

For ecologists and conservationists, understanding how these species’ viable habitats expand and contract in the context of a rapidly shifting climate is critical. As such, species distribution modeling is often used to predict migration habits and suitable habitats for species under different environmental conditions.

But current models can produce inaccurate, and overly optimistic results, because they fail to consider a key question: can a species realistically reach a suitable climate before it’s too late?

Not all environments are suitable for every species, and animals shift and migrate at different paces based on a range of factors, such as mobility, reproductive ability, or landscape features. In ecology, this is known as a dispersal limit or constraint.

“When we think about the impact of climate change on species habitat, we have to ask: where can the species live in the future under climate change, but more importantly, can they get there?” said Bistra Dilkina, a USC computer science associate professor and co-director of USC’s Center for Artificial Intelligence in Society.

“We have to dynamically and accurately assess conservation priorities and getting the right tools to understand future concerns is very important.”

That’s why Dilkina teamed up with Georgia Tech biogeographers Jenny McGuire, an assistant professor, and Ben Shipley, a Ph.D. candidate, to create MegaSDM, the first modeling tool that considers dispersal limits for many species, climate models, and time periods at once.

When provided a list of species and environmental data, the model produces a series of maps illustrating how species move over time in different scenarios under climate change.

In a recent paper, the team modeled 165 North American mammals’ distributions in 2010 and projected to 2050 and 2070 under two scenarios: with dispersal limits and without. They found a predictable decline in overall species richness from 2010 to 2070 across North America, and a small but visible shift northward.

But the map with dispersal constraints sounded a dire warning: many species will be unable to colonize all the available suitable habitats in 2070.

“When dispersal rate is taken into consideration, the future looks bleaker than we would have anticipated,” said McGuire.

As a result, the model could allow researchers to shine new light on which species are truly at risk of extinction due to climate change. Previous studies suggest that species with slow dispersal rates—including primates, shrews, moles, and species from the opossum order—are at the highest risk, in the Western hemisphere at least.

Also at risk are cold-weather, high-elevation species such as the pika, a small mountain-dwelling animal that can overheat and die in temperatures as mild as 78 degrees Fahrenheit. Despite declining numbers, the tiny mammal has been denied endangered species status with studies suggesting it will migrate to cooler areas upslope.

But with dispersal constraints taken into account, the future looks less optimistic for the pika.

“Pikas are unlikely to move around a lot throughout the year, so their dispersal rates are quite low. As a result, even if some new suitable habitat opened up on a mountain range to the north, it might be unlikely that any population of pika would establish there, and as the climate warms, their habitats will shrink,” said Shipley.

“The map without dispersal constraints may show an expansion to colder and higher mountain ranges, whereas a dispersal-constrained map would show a decrease in habitat without a corresponding expansion through time.”

Another advantage of MegaDSM: it can synthesize many species, time periods and climate scenarios at once. By outputting unique maps describing the changes in species ranges, it allows researchers to predict species distributions going back and forward in time to anticipate where a species could potentially live in the future.

“Most of the current techniques used by species distribution models are static, so they only project to a single time period, and they don’t incorporate aspects of movement across landscapes,” said Shipley. “But MegaSDM uses a multi-step time approach, so you can apply these distribution models to past or present time periods, and show dynamic movement, like expanding and shrinking of range sizes.”

It also allows researchers to tease apart the impacts of climate change versus other barriers to migration—urban development or unsuitable habitat for instance.

“If we look at just today, we’re not getting a full picture of all the different climates in which a species can live,” said McGuire. “The tool allows us to recognize when a species is being restricted by other types of impacts, and it allows us to better anticipate where they could potentially live in the future and to identify potential areas for restoration.”

First, the researchers modeled the habitat suitability for species using relevant publicly available data, such as geographic information systems (GIS) layers, including elevation, land cover, urbanization level and forestation. Next, they looked at where these species have been detected, and climate data for the present and the future.

Going forward, the team plans to use the tool to identify species at the highest risk in the hopes of strategically implementing conservation strategies, wildlife steppingstones or corridors for instance, to expand the connectivity of conserved landscapes.

In particular, Dilkina plans to employ MegaSDM in her collaborative work with ecologists, economists, GIS and policy researchers on a new National Science Foundation grant titled ‘Scrambled responsibilities – species conservation and collaborative governance in an era of global change.’

“Climate change is here faster than we anticipated,” said Dilkina. “Building the tools to help us make quantitative predictions about what will happen is extremely important, and I believe this will empower future action in biodiversity conservation and climate change mitigation efforts.”

In a warmer world, half of all species are on the move. Where are they going? 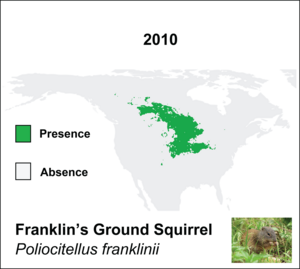