"Forever chemicals," named for their ability to persist in water and soil, are a class of molecules that are ever-present in our daily lives, including food packaging and household cleaning products. Because these chemicals don't break down, they end up in our water and food, and they can lead to health effects, such as cancer or decreased fertility.

Last month, the U.S. Environmental Protection Agency proposed to give two of the most common forever chemicals, known as PFOA and PFOS, a "superfund" designation, which would make it easier for the EPA to track them and plan cleanup measures.

Cleanups would obviously be more effective if the forever chemicals could be destroyed in the process, and many researchers have been studying how to break them down. Now a team of researchers at the University of Washington has a new way to destroy both PFOA and PFOS. The researchers created a reactor that can completely break down hard-to-destroy chemicals using "supercritical water," which is formed at high temperature and pressure. This technology could help treat industrial waste, destroy concentrated forever chemicals that already exist in the environment and deal with old stocks, such as the forever chemicals in fire-fighting foam.

The team published these findings on Sept. 7 in Chemical Engineering Journal.

What is supercritical water and how can it destroy these molecules?

Igor Novosselov: Our reactor basically heats water very fast, but it heats water differently than when you boil it for pasta. Typically, hen you raise the temperature, water boils and turns to steam. From there, the water and steam do not get hotter than 100 degrees Celsius (212 F).

But if you compress water, you can shift that equilibrium and get that boiling point at much hotter temperatures. If you increase the pressure, the boiling temperature increases. At one point, the water will not transition from liquid to vapor. Instead, you'll hit a critical point where water will reach a different state of matter, called the supercritical phase. Here water is not a liquid or a gas. It's something between, and the lines are kind of fuzzy there. It's something like a plasma where the water molecules become like ionized particles. These partially dissociated molecules bounce around at high temperatures and high speeds. It is a very corrosive and chemically aggressive environment in which organic molecules cannot survive.

Chemicals that survive forever in normal water, such as PFOS and PFOA, can be broken down in supercritical water at a very high rate. If we get the conditions right, these recalcitrant molecules can be completely destroyed, leaving no intermediate products and yielding only harmless substances, such as carbon dioxide, water and fluoride salts, which are often added to municipal water and toothpaste.

How did you get started designing this reactor?

IN: We originally designed it to break down chemical warfare agents, which are also really hard to destroy. It took us five years to make the reactor. There were significant questions such as, how do we keep things at that pressure? Inside the reactor, the pressure is 200 times higher than at sea level. Another question we had was: How do we ensure that the reactor ignites and operates at a designated temperature in continuous mode? It became an engineering project, but after all, we're engineers.

How does the reactor work?

IN: The whole thing is inside a thick stainless steel pipe about a foot long and an inch in diameter. We can vary the temperature inside to figure out how hot we need to go to completely destroy a chemical. Some chemicals require 400 C (752 F), some 650 C (1202 F).

At the top of the reactor, we continuously inject pilot fuel, air and the chemical we want to destroy, for example: PFOS, into the supercritical water. The fuel provides the necessary heat for the mixture to remain supercritical, and the PFOS rapidly mixes with this aggressive media. Overall the reaction time is less than a minute. At the bottom of the reactor, the mixture is cooled down to yield both liquid and gas discharge. We can analyze what's in both the liquid and the gas phases to measure whether we've destroyed the chemical.

What did you find?

IN: We did the same experiment with PFOS and PFOA, because both are regulated by the EPA. We saw that PFOA goes away at mild supercritical conditions (around 400 degrees C, or 750 F), but PFOS doesn't. It took until we reached 610 degrees C (1130 F) to see the destruction of PFOS. At that temperature, PFOS and all intermediates were destroyed — in a matter of 30 seconds.

At lower temperatures, PFOS experiments showed the formation of a variety of intermediate molecules, including PFOA. Some of these breakdown products came out in the liquid phase, which means they could be present in wastewater at manufacturing sites that use forever chemicals. But other intermediates are coming out in the gas phase, which is problematic because gas emissions are not typically regulated. These molecules contain the element fluorine, and we know these types of gases contribute to greenhouse effects. Right now, we don't have a way to monitor the gas pollution in real-time, and we do not know how much we would produce or even their exact chemical composition.

What's next for this project?

IN: We have a few next steps. We've been using the reactor to see how well it destroys other forever chemicals besides PFOS and PFOA. We're also assessing how well this technology could work for real-world scenarios. You probably cannot treat the whole ocean like this, for example. But we could possibly use this to treat existing problems, such as forever chemical waste at manufacturing sites.

Forever chemical contamination is a big problem, and it will not go away. We are excited to work on it and collaborate with regulators and leading groups in academia and industry to find the solution.

UW researchers develop a reactor that can destroy 'forever chemicals' 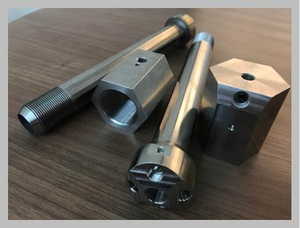