Woods Hole, Mass. (Sept. 14, 2022) -- For the so-called “most romantic birds on Earth,” bold behavior is key to a lasting relationship. In a paper published today in Royal Society Biology Letters, researchers at the Woods Hole Oceanographic Institution (WHOI) demonstrate a clear connection between personality in wandering albatross (Diomedea exulans) and the likelihood of divorce. Though the link between personality and relationship outcomes in humans is well-established, this is the first study to do so with animals.

Making use of long-term studies of wandering albatross on Possession Island, part of the Crozet archipelago in the Southern Indian Ocean, the authors found that bolder male birds were more likely to keep their mates when another male attempted to take their place. Though wandering albatross are known to mate for life, this type of “forced divorce” does happen because females are in short supply on Possession Island. Due to their smaller body size and overlap with commercial fishing grounds, females are more likely to perish while foraging, leading to a high percentage of male widows. Wandering albatross are considered “vulnerable” by the International Union for Conservation of Nature (IUCN).

“In instances of forced divorce, bolder individuals are more likely to guard their partner. Shyer individuals tend to avoid risks and engaging in antagonistic interactions with intruders,” said lead author Ruijiao Sun, a PhD. candidate with the MIT-WHOI joint program. “Breeding is very costly to wandering albatross. So individuals have to make a trade-off between reproduction and their own survival.”

The authors based their study on a 54-year monitoring program on Possession Island, which identified wandering albatross partners and breeding outcomes, and field experiments conducted since 2008 by co-authors Henri Weimerkisrch and Christophe Barbraud at Centre National de la Recherche Scientifique (CNRS) and Samantha Patrick of the University of Liverpool, which characterized the personality traits of nearly 2,000 birds. In the latter study, when a human or “novel object” like a bright toy approached a nesting albatross, an observer would record the birds’ reaction and give it a grade. If the birds called or stood up, they were considered bold. If they exhibited little to no reaction, they were considered shy.

These personality traits translated into predictable behavior when males guarded their mates from competitors, the study showed. Bold males exhibited aggressive behaviors when approached by an intruder, preventing divorce; shyer males would cede the nest, allowing divorce. Shy females did not have the same high likelihood of divorce as their male counterparts, likely because there was no consequence if they mated with a temporary partner or skipped breeding for prolonged periods.

Stéphanie Jenouvrier, a WHOI biologist who is Sun’s advisor and senior author of the paper, notes that these findings might not apply in albatross colonies with more breeding females because there would be less competition for mates, or less incentive for “forced divorce.”

“Divorce can sometimes be adaptive, to gain a better partner or offspring. But in the case of forced divorce, there is no benefit to future reproduction,” said Jenouvrier. “We were able to study the impact of personality on divorce only because we had access to incredible long-term data sets combining demography and personality for this population.”

Though the authors say personality traits are an accurate predictor of relationship outcomes for wandering albatross on Possession Island, they don’t think the same methods could be applied to humans.

“Scientists use different approaches to measure personality in humans,” said Sun. “We expect shyer humans are less likely to divorce, and we know that risk-taking behaviors are linked to divorce.”

Woods Hole Oceanographic Institution is a private, non-profit organization on Cape Cod, Mass., dedicated to marine research, engineering, and higher education. Established in 1930 on a recommendation from the National Academy of Sciences, its primary mission is to understand the oceans and their interaction with the Earth as a whole, and to communicate a basic understanding of the oceans’ role in the changing global environment. For more information, please visit www.whoi.edu.

The bolder bird gets (and keeps) the girl 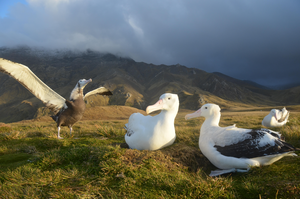