Since the earliest demonstration of chirped-pulse amplification (CPA) and optical parametric chirped-pulse amplification (OPCPA), femtosecond lasers have been able to deliver ultrahigh peak powers up to ten-petawatt (PW), thereby paving the way for compact particle accelerators and X-ray sources. To further increase peak powers, it calls for laser amplification schemes with both high conversion efficiency and large bandwidth. However, CPA laser amplifiers suffer from relatively narrow gain bandwidth, whereas OPCPAs suffer from relatively low signal efficiency or pump depletion due to back conversion.

In a new paper published in Light Science & Application, a team of scientists, led by Professor Liejia Qian from Key Laboratory for Laser Plasmas (MOE), School of Physics and Astronomy, Shanghai Jiao Tong University, China, and co-workers have demonstrated an ultrahigh-efficiency and low-noise scheme of quasi-parametric chirped-pulse amplification (QPCPA), which is a variation of OPCPA by dissipating the idler with strong crystal absorption. The idler dissipation obstructs the back conversion effect and enables the QPCPA performance of high efficiency, large bandwidth, and robustness against phase mismatch. They experimentally demonstrated 56% energy efficiency for an 810-nm signal converted from a 532-nm pump, or equivalently 85% pump depletion. Such a record high depletion greatly suppressed the parametric superfluorescence (PSF) noise in QPCPA to only ~10-6 relative to the amplified signal energy.

In their experiment, a 8-cm Sm:YCOB crystal was used with the orientation for maximized nonlinear coefficient, which were transparent for both the pump and signal but opaque for the idler. Under a pump intensity of 3 GW cm−2, the highest signal efficiency of 56% was achieved with a seed intensity of ~7 MW cm−2, corresponding to a pump depletion of 85%. The demonstrated QPCPA pump depletion was approximately 2.5 times that of OPCPA. The strong pump depletion by efficient signal amplification significantly suppressed the generation of PSF noise. Within the largest signal output of ~65 mJ, the measured PSF noise energy was as low as ~10 μJ. The pulse contrast after compression should be as high as ~109. Prof. Ma, the first author, explained why they name such a process ‘quasi-parametric’ amplification:

“Since the back-conversion effect is completely obstructed, the QPCPA is also robust against phase mismatch. This means that QPCPA is insensitive to the variation of pump beam pointing and the environment temperature. This benefits the high repetition-rate operation of QPCPA.” He added.

“With its very large product of efficiency and bandwidth, the QPCPA scheme based on a large-size Sm:YCOB crystal can support a peak power as high as 50 PW by using the same pump energy of current ten-petawatt laser facilities, so QPCPA may be a qualified candidate for pushing ultraintense lasers beyond the current ten-petawatt limit.” Prof. Ma forecasted. 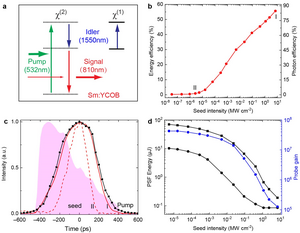