The viral prophylactic tests were conducted in a lab on several types of cells. The results were reported today in the scientific journal, Advanced Science.

Hongji Yan, a biomaterials researcher at KTH, says the promising results raise hope that when it becomes available as a product, the gel could help reverse troubling trends in the spread of sexually transmitted infections. More than 1 million STIs are acquired every day worldwide and most of these are asymptomatic, according to the World Health Organization (WHO). AIDS, the disease caused by HIV, remains a significant global epidemic, and adolescent girls and young women are twice as likely as men to contract HIV as their male counterparts according to UNAIDS.

The lubricant is derived from mucin, a main component of mucus that is produced in the human body, though suppliers provide the bovine type in purified form for fabrication of hydrogels.

Hongji says the natural complexity of the mucin molecules is the reason the synthetic gel is so effective at stopping the HIV and herpes, without the risk of side effects or development of resistance as with other antiviral compounds. Such functions would be difficult to achieve with a polymer made from scratch, he says.

In our body, mucin molecules can bind to and trap virus particles, which are then cleared through active mucus turnover. Hongji says the synthetic gel replicates this self-healing function, which is a key material property that enables mucus’ lubricity and prophylaxis against infection.

Hongji says the gel could help more people take greater control of their sexual health. It could offer protection when condom protection is not an available option, or even as back-up protection in case of condom failure or incorrect use. It could be used in both female-to-male sex and male-to-male sex.

The mucins in the synthetic gel also help to dampen the activation of immune cells, he says. This is important because activated immune cells stimulate HIV replication. 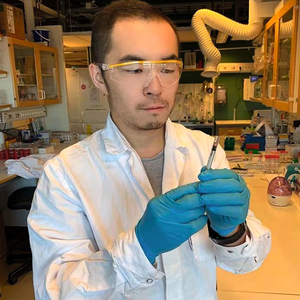 Hongji Yan in the laboratory at KTH Royal Institute of Technology