Famous for their eight arms, octopuses leverage all of their appendages to move, jet through the water and capture prey. But their movements can look awkward and seemingly unplanned at times, more closely resembling aliens than earthly creatures.

“Normally when you look at an octopus for a short while, nothing is repeatable. They squirm around… and just look weird in their exploratory movements,” said Trevor Wardill, an assistant professor in the College of Biological Sciences who studies octopuses and other cephalopods.

For a new study in Current Biology, Wardill and colleagues investigated whether octopuses preferred certain arms over others when hunting, rather than using each arm equally. A better understanding of how they use their arms will aid efforts to develop next-generation highly manipulative soft robots.

The research team studied the California two-spot octopus, which live for about two years and grow to the size of tennis balls. Octopus arms are numbered on each side of its body, starting at the center. Researchers dropped different types of prey, including crabs and shrimp, into the tanks and recorded video as the octopuses, who were hiding in ornamental SpongeBob “dens” with one eye facing outward, lunged for the snack. Because crabs move slowly while shrimp can flick their tails to escape quickly, each type of prey potentially requires different hunting tactics.

Flavie Bidel, the lead author and a postdoctoral researcher in the lab, was shocked at how predictably octopuses began prey capture with the second arm. For creatures whose movement appears unpredictable, the hunting behavior was actually exceedingly repeatable. One of the next steps is to study how neurons facilitate the arm movements.

“Octopuses are extremely strong. For them, to grasp and open a door is trivial, given their dexterity. If we can learn from octopuses, then we can apply that to making an underwater vehicle or soft robot application,” said Wardill. Underwater vehicles inspired by octopuses could play a crucial role in deep ocean exploration.

Funding and support for this work was provided by the Office of Naval Research. The Wardill lab is based in the Ecology, Evolution and Behavior Department in CBS.

About the College of Biological Sciences

The College of Biological Sciences at the University of Minnesota is one of two colleges in the United States dedicated to the biological sciences with undergraduate majors and graduate programs that cover the spectrum of life from molecules to ecosystems. Learn more at cbs.umn.edu.

Octopus bimaculoides arm recruitment and use during visually-evoked prey capture 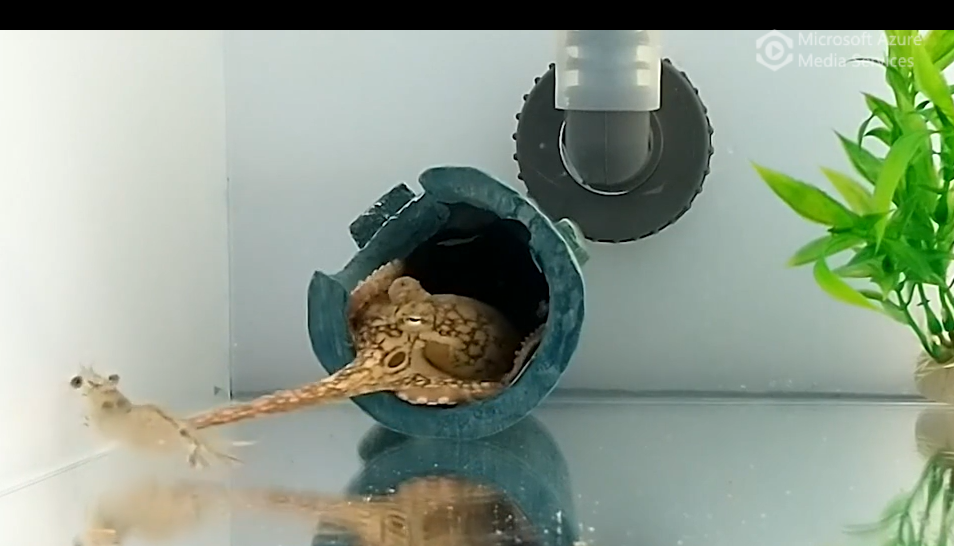