During fieldwork aimed at documenting the stone tool use of a group of wild chimpanzees in the Taï Forest in Cote d'Ivoire in early 2022, the researchers identified and 3D scanned a variety of stone tools used to crack different nut species.

It has long been shown that various chimpanzee groups possess different tool use cultures involving wooden and stone tools, however, only some groups in West Africa use stone tools to crack open nuts. By comparing the 3D models of different stone tools used by chimpanzees in the Taï Forest to those from another group in Guinea, the researchers showed that there exist notable differences between the two groups in terms of their material culture.

The study shows that this particular group of chimpanzees in Guinea uses stone hammers varying in the type of stone and sizes, and very large stone anvils, sometimes greater than one meter in length. These durable stone tools are widespread across the landscape; preserve different levels of damage related to their use and represent a lasting record of chimpanzee behaviours.

This study highlights the fact that, although several groups of chimpanzees practice nut cracking, the tools they use can differ significantly from one another, potentially leading to group specific material signatures. These differences are driven by a combination of stone choice, stone availability, and the nut species eaten.

Previous research has shown, that by using stone tools, some groups of chimpanzees develop their own archaeological record dating to at least 4,300 years ago. “The ability to identify regional differences in stone tool material culture in primates opens up a range of possibilities for future primate archaeological studies,” says Tomos Proffitt from the Max Planck Institute of Evolutionary Anthropology, who led the research.

It has been hypothesised that a simple technology, like nut cracking, was a precursor to more complex stone technologies during the early stages of our own evolution more than three million years ago. Proffitt continues, “by understanding what this simple stone tool technology looks like, and how it varies between groups, we can start to understand how to better identify this signature in the earliest hominin archaeological record.” 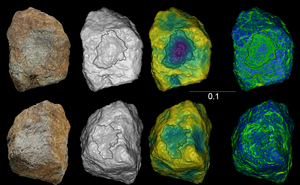