Better water quality in Wales’ most famous cockle area is linked with smaller cockles that have a higher mortality rate, a new survey of fifty years of data has revealed.

Cockles have been harvested along the south Wales coast for centuries.  The Burry Inlet and Loughor estuary, near Swansea, is a major habitat for the popular and widespread common cockle (Cerastoderma edule).

Like other bivalve species, cockle populations are prone to change, either because of sudden or gradual alterations in the natural environment, or because of human activity.

The new research offers more insight into this variation and into long-term trends, which will help with conservation and management of cockle stocks.

Swansea University bioscientist Dr Ruth Callaway conducted the research.  She examined 64 cockle monitoring reports from the Burry Inlet which were compiled in the years between 1958 and 2009.  She used these to analyse trends in overall numbers of cockles, their size and mortality rates, against the background of changes in weather, climate and wastewater treatment.

The overall message from the data was of profound variation over the 50-year period from 1958 to 2009.

Specific findings from the survey were:

The research did not evaluate the impact of harvesting on cockle populations because the monitoring reports did not include data on this, though fishing cannot be ruled out as a factor contributing to variation in the cockle population.

Changes in water treatment, however, emerge from the data as a major factor.   Before 1997 wastewater effluent was discharged into the estuary from seven sewage plants.  This was modernised with two new plants using treatment processes that disinfected the effluent and removed the nitrogen.  This meant cleaner, healthier water for humans, but fewer nutrients to sustain cockles.

Dr Ruth Callaway of Swansea University, the bioscientist who carried out the research, said:

“The data reveals further evidence that the change in wastewater treatment in the Burry Inlet in 1997 reduced food availability for cockles, which led to smaller average sizes of cockles, which in turn shortened their life span.

High standards for water quality are essential.  The challenge is to find ways of keeping our water clean and our cockle population strong at the same time.

To find a solution to any problem with the cockle stocks, we first need as full a picture as possible of its history and the background variation.  This is where the new research can help.  It deepens our understanding of the relationship between wastewater management and bivalves, giving us more insight into variation and into long-term trends, which will help with conservation and management of estuaries and cockle populations.”

“I have personally observed how cockles got smaller over the years. It did not just affect cockles, but in my experience mussels and lugworms also reduced in size, which I believe is linked to the change in wastewater treatment.”

“I have personal memories of the cockle gatherers as a young boy in Gower, when they were going out onto the north Gower sands and returning with the shellfish. Cockle fishery creates a lasting heritage in coastal communities.

As an MP I regularly negotiated between the fishermen, governmental organisations and researchers, and Ruth and I have been discussing changes in cockle populations for years.

This long-term data highlights the profound changes in the fishable cockle stocks over the past decades, which can be natural or influenced by human activities. The knowledge is vital for the management of the fishery, which must be supported in the long term.”

“Our objective is to develop a thriving fishery which supports, protects and enhances the needs of the community, and the environment upon which it depends.

This is a milestone paper, which provides evidence to help us better understand long-term trends in cockle populations over a 50-year period up to 2009, when a number of factors were affecting the population.

While there are ongoing challenges, Fishery Management improved in recent years, including better survey methodologies and a new Management Plan. This provides much better information on stock distribution and population trends.

To build upon this important paper we hope to publish a review of the most recent survey data and evidence from 2010 to bring this story fully up to date”.

Cockles in a sieve

A cockle being measured 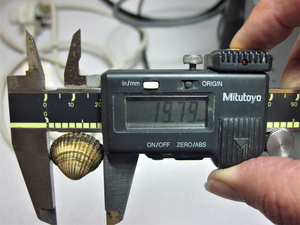 Measuring a cockle during the research 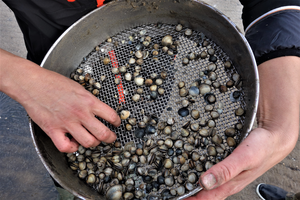 Cockles in a sieve