Phosgene is widely used in the production of pharmaceuticals, plastics, chemical intermediates among others. However, its high toxicity has led to demand for safer, more environmentally friendly alternatives.
In collaboration with AGC Incorporated, researchers at Kobe University’s Graduate School of Science (Associate Professor TSUDA Akihiko and Associate Professor EDA Kazuo et al.) have developed fluoroalkyl carbonates, which have properties that make them environmentally friendly alternatives to toxic precursors currently used in the chemical and pharmaceutical industries, among others. The fluoroalkyl carbonates have high reactivity (i.e. can promote chemical reaction well) for synthesizing pharmaceutical intermediates and other substances, and are easy to process. Adding fluorine to organic compounds results in various added properties: it makes them water and oil repellent, strong against heat, light and chemicals, and changes chemical reactions.
Up until now fluoroalkyl carbonates have been difficult to produce, however the team succeeded in synthesizing large quantities in a safe, simple and economical manner using the photo-on-demand method developed by Kobe University. Through their unique academic approach, the researchers also revealed some new hidden properties of fluoroalkyl carbonates. It is hoped that these carbonates can be used in academia and industry for high-end compounds.
Patents were obtained in the USA (November 2021) and Japan (April 2022) for the photo-on-demand process for synthesizing fluoroalkyl carbonates. These research findings were published online in The Journal of Organic Chemistry on August 18, 2022.

Research Background
At present, a chemical compound called phosgene is often used as precursor for polymers and as a pharmaceutical intermediate. The global phosgene market continues to grow by several percent each year, with around 8 to 9 million tonnes produced annually. However, phosgene is extremely toxic. For safety reasons, research and development is being conducted to find alternatives. Diphenyl carbonate is less toxic than phosgene and is used as a substitute in various chemical reactions. However, its usage is limited due to its low reactivity.
Therefore, there is demand for the development of carbonates with high reactivity in order to increase the number of reactions for which carbonates can be a substitute. Unfortunately, carbonates are generally synthesized from phosgene and alcohol, so little progress has been made.
However, Associate Professor Tsuda et al. recently made a world-first discovery. They were able to synthesize carbonate in a highly efficient manner merely by dissolving alcohol and organic bases in chloroform (a commercially available solvent) and then illuminating the resulting solution with light. With this discovery, it will be possible to avoid using toxic phosgene in the synthesis of various chemical products that have previously required it. The research group has named their discovery ‘photo on demand organic synthesis method’ and are using it to create existing useful compounds as well as novel functional chemicals. These highly original chemical reactions invented by Kobe University are being developed through collaborations between industry, government and academia with implementation as the goal of this research. Kobe University and AGC are receiving funding from the Japan Society and Technology Agency (JST)’s A-STEP program (seeds development type). Together they have been carrying out further applied research on this synthesis method as well as developing functional polyurethane.
Organic fluorides generally have distinctive properties (eg. they are water and oil repellent, strong against heat and chemicals, and do not absorb light), therefore their applications include water repellents, surface treatments, emulsifiers, fire-extinguishing substances, and coatings. In addition, organic fluorides are known to cause unique chemical reactions because fluoride atoms strongly withdraw electrons. In collaboration with AGC (a producer of fluorine compounds and chloroform), this research group has been able to propose industrial applications for the photo-on-demand synthesis method, as well as strive towards the development of new functional materials through its application.

Research Methodology
This research group successfully synthesized highly reactive fluoroalkyl carbonate using the photo-on-demand synthesis method. They determined its reactivity through methods, which included testing the reaction speed and product yield when it was reacted with alcohol and amin (see Figure 2 and Table 1), as well as conducting analyses using Fourier transform infrared spectroscopy (FT-IR).
Carbonates are a substitute in a number of chemical reactions that conventionally require extremely toxic phosgene (row 1 of Table 1). For example, diphenyl carbonate with an aromatic substituent (see row 7) is used in polycarbonate synthesis. However, carbonate with an alkyl chain (row 8) demonstrates lower reactivity so is generally not used for such applications. Interestingly, it was revealed that fluoroalkyl carbonates (rows 2, 3, 4 and 5) exhibit higher or similar reactivity. It was confirmed that among these fluoroalkyl carbonates; alkyl carbonate (row 3) and aromatic carbonate (row 2), which have more fluoride atoms, exhibit dramatically increased reactivity. The by-product, fluoroalcohol, has reduced affinity with the organic compound produced and a low boiling point. Therefore, it is possible to easily remove it from the product by drying it. Even if the fluoroalcohol remains, it is far less toxic and corrosive than the by-product of synthesis using phosgene (which is hydrogen chloride). It also exhibits the distinctive properties of organic fluorine compounds, making for a highly functional, high quality chemical product.
The information about fluoroalkyl carbonates’ reactivity and by-products that this research revealed through systemic analysis can be used as a reference. Users can estimate costs (such as the precursor’s purchase price and synthesis costs) and select the carbonate precursor that is most appropriate for the chemical or product they wish to synthesize.

Further Developments
When the phosgene method applied to the production of polymers and pharmaceutical intermediates, the hydrogen chloride (HCl) residue in the product can cause corrosion and degradation. Therefore, the removal of hydrogen chloride is an industrial problem. It is hoped that with their high reactivity, fluoroalkyl carbonates can serve as a phosgene substitute in the synthesis of various chemical products. In addition, they could be used in electronics-related fields as they don’t produce HCl as a by-product.
The synthesis of fluoroalkyl carbonate using the photo-on-demand method, and its application to the synthesis of chemical products is expected to promote the development of new functional materials. It is also hoped that it will lead to significant advances in low-energy, low-environmental impact chemical reactions, and contribute greatly to the SDGs and efforts to become carbon neutral.

The Journal of Organic Chemistry

The authors declare the following competing financial interest(s): This research was funded by AGC Inc. 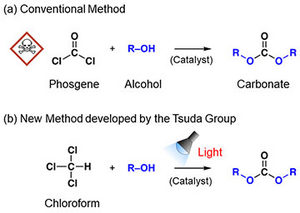 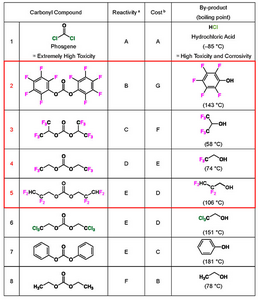