When you make conducting wires thinner, their electrical resistance goes up. This is Ohm’s law, and it is generally right. An important exception is at very low temperatures, where the mobility of electrons increases when wires become so thin that they are effectively two-dimensional. Now, University of Groningen physicists, together with colleagues at Brest University have observed that something similar happens with the conductivity of magnons, spin waves that travel through magnetic insulators, much like a Mexican wave through a stadium. The increase in conductivity was spectacular, and occurred at ambient room temperature. This observation was published in Nature Materials on 22 September.

Electrons have a magnetic moment, called spin, which has a value of ‘up’ or ‘down’. It is possible to accumulate one type of spin by sending a current through a heavy metal, such as platinum (see figure). When those spins carried by electrons encounter the magnetic insulator YIG (yttrium iron garnet), the electrons can’t pass through. However, at the interface with YIG, the spin excitation is passed on: magnons (who can also carry spin) are excited. These spin wave pass through the magnetic insulator like a Mexican wave in a stadium: none of the electrons (the ‘spectators’) move from their place, but they nevertheless pass on the spin excitation. At the detector electrode the reverse process happens: the magnons make electronic spins, which then produce an electrical voltage which can be measured, explains Bart van Wees, Professor of Applied Physics at the University of Groningen and specialist in fields such as spintronics.

Motivated by the increase of electron mobility in 2D materials, his group decided to test magnon transport in ultrathin (nanometers) YIG films. ‘These films are not strictly 2D materials, but when they are thin enough, the magnons can only move in two dimensions’, Van Wees explains. The measurements, performed by PhD student Xiangyang Wei, produced a surprising result: The spin conductivity went up by three orders of magnitude, in comparison to YIG bulk material.

Scientists don’t use terms like ‘giant’ lightly, but in this case, it was fully warranted, says Van Wees. ‘We made the material 100 times thinner, and the magnon conductivity went op 1,000 times. And this didn’t happen at low temperatures, as is required for high electron mobility in 2D conductors, but at room temperature.’ This result was unexpected and, so far, unexplained. Van Wees: ‘In our paper we give a tentative theoretical explanation which is based on the transition from 3D to 2D magnon transport. But that cannot fully explain the dramatic effects we observe.’

So, what could be done with this giant magnon conduction? ‘We don’t understand it’, says Van Wees. ‘Therefore, our current claims are limited. This is enabling research that might point the way to some new yet undiscovered physics. In the long run, this might produce new devices as well.’ First author Xiangyang Wei adds: ‘Because there is no electron transport involved, the magnon waves produce no conventional heat dissipation. And heat production is a big problem in ever smaller electronic devices.’

And as magnons are bosons (i.e. they have integer spin quantum values), it might be possible to create a coherent state comparable to a Bose-Einstein condensate. Van Wees: ‘This might even produce spin superconductivity.’ All this is for the future. For now, the giant magnon conductance in YIG is well documented. ‘The measurements are clear. We are looking forward to a good collaboration of theoretical physicists and experimentalists.’ 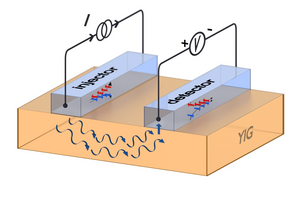