A research question posed in Pankaj Desai’s lab has led to a decade of research, a clinical trial and major national funding to further investigate a potential new treatment for the most deadly form of brain tumors.

Desai, PhD, and his team at the University of Cincinnati recently received a $1.19 million grant from the National Institutes of Health/National Institute of Neurological Disorders and Stroke to continue research into the use of a drug called letrozole to treat glioblastomas (GBM).

GBMs are aggressive brain tumors that patients often are unaware of until symptoms emerge and the tumor is substantial. Current treatments include immediate surgery to safely remove as much tumor as possible, radiation and chemotherapy, but the tumor often recurs or becomes resistant to treatments. The average patient survives no more than 15 months after diagnosis.

The medication letrozole was approved by the U.S. Food and Drug Administration as a treatment for postmenopausal women with breast cancer in 2001. The drug works by targeting an enzyme called aromatase that is present in breast cancer cells and helps the cancer grow.

In the fall of 2012, Desai and a doctoral student in his lab, Nimita Dave (now a senior pharmacologist at a biotech company in Boston), asked a question: Does aromatase play a similar role in GBM tumors, and if so, will letrozole work as an effective treatment?

Early research in the lab found the enzyme was present in brain tumor cell lines, and further testing found a very high amount of aromatase at protein and mRNA levels in brain tumor samples from UC’s tumor bank. However, that did not guarantee that letrozole would be similarly effective in brain tumors like it is in breast cancer tumors.

Desai explained a defense system called the blood-brain barrier only allows certain compounds into the brain based on their physical and chemical properties.

“Otherwise any compound could come into the brain and cause havoc and neurotoxicity,” said Desai, professor and chair of the Pharmaceutical Sciences Division in UC’s James L. Winkle College of Pharmacy and a University of Cincinnati Cancer Center member. “There are other compounds similar to letrozole, but we went with letrozole because we figured that based on its properties, this compound actually has the best chance of getting through into the brain from the blood circulation.”

Studies in animal models showed that letrozole was effective, and Desai’s research group moved to test the compound in cells derived from human brain tumor tissues. In this phase of work, key contributions were made by current doctoral student Aniruddha Karve who will continue to work with Desai as a postdoctoral fellow on the new NIH grant.

“What we saw in the patient-derived cells is that letrozole is very effective in killing the tumor cells in cell culture models,” Desai said.

With funding support from the Cancer Center and the UC Brain Tumor Center, Desai’s team launched a phase 0/1 clinical trial testing what dosage of letrozole is appropriate to treat glioblastomas. This trial was led by Trisha Wise-Draper, MD, PhD, an expert in phase 1 oncology trials with contributions from several other neuro-oncologists and neurosurgeons.

The trial is set to be completed soon, but Desai said early results have shown the drug is “unequivocally” reaching its target of the brain tumor tissue safely. Preliminary results also show that doses of letrozole higher than those needed for breast cancer treatment can be safely achieved in GBM patients.

While the body of research results has been encouraging so far, Desai said GBMs remain a complicated, aggressive form of brain cancer. As promising as letrozole is, it is still unlikely that the drug will be a singular cure for the disease.

“We hope that would work, but it’s not necessarily rooted in reality. It’s going to be a combination of drugs,” Desai said.

Supported by the new NIH/NINDS funding, Desai and his team will research the preclinical effectiveness of combining letrozole with other chemotherapy compounds. The three-year grant began Aug. 1.

“It’s really exciting to get this sort of reassurance from a peer reviewed grant application,” Desai said. “And it’s an exciting time. I think finding a cure for a disease like GBM is like finding a needle in a haystack, and we hope that it’s going to really work, and that’s what we are all striving for.”

Desai said the research has been and continues to be a collaborative effort between UC colleagues from the College of Pharmacy, Cancer Center and Brain Tumor Center.

“It’s really a beautiful collaboration, and I’m most grateful for that,” Desai said. “This is a disease where an urgent breakthrough is absolutely needed, and our team along with others in the field are really striving to make a difference.”

David Plas, PhD, professor and Anna and Harold W. Huffman endowed chair in glioblastoma experimental therapeutics in the Department of Cancer Biology in UC’s College of Medicine and a Cancer Center member, and his research group are joining the team as the new project launches.

Plas said his lab has focused on tumors deficient in a tumor-suppressing protein called PTEN, and the new research may reveal how letrozole in combination with other therapies may lead to a suitable treatment for PTEN-deficient glioblastomas.

“This new collaboration will combine my group’s experience in glioblastoma experimental therapeutics with Dr. Desai’s experience in GBM therapeutics and pharmacokinetics,” Plas said. “By investigating possible combinations with letrozole for GBM therapy, this new project has the potential for faster translation to clinical trial. It is exciting to work with Desai on this new project.”

Other collaborators include Gary Gudelsky, PhD, and Tim Phoenix, PhD, of the UC College of Pharmacy; and Soma Sengupta, MD, PhD, and Mario Zuccarello, MD, of the UC Brain Tumor Center. 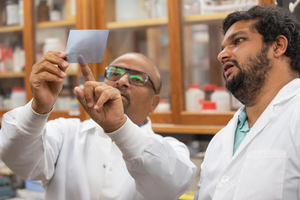