Historically, viruses have contributed to the most significant human diseases. They include human immunodeficiency virus (HIV), various influenza viruses and SARS-CoV-2. As one of the most devastating pandemics in human history, the “1918 influenza pandemic”, caused by an H1N1 virus, was responsible for tens of millions of casualties in the early twentieth century.

Light has been recognized as a potential antimicrobial device to fight against infectious diseases for hundreds of years. Exposure to healing rays has become a common form of light therapy against bacterial infections, as well as wound infections, psoriasis, acne vulgaris, rickettsia, depression, jaundice, and a host of other diseases. Studies continue to explore the application of rays against infective pathogens.

In a new paper published in eLight, a team of scientists, led by Professor Esmaeil Biazar (Islamic Azad University) and Professor Dayong Jin (University of Technology Sydney), have investigated the use of radiation in disrupting viral functionalities. Their paper, titled “Viral Inactivation by Light,” looked at different forms of radiation and their impact on viral elimination.

As alternative antiviral therapies, scientists have introduced physical methods and techniques to disrupt viral functionalities. For example, it has been demonstrated that applying light beams can be useful for viral inactivation. A combination of physical methods and understanding of the physicochemical mechanisms of viral inactivation will be effective in designing and developing tools for viral elimination with improved efficacy, safety, and long-term application. This article reviews irradiation-dependent physical methods and studies related to the inactivation of viruses, especially enveloped viruses such as HIV, influenza, or hepatitis, which are responsible for serious problems.

Ionizing radiation can inactivate pathogens by destroying the genome but causing less damage to structural components, such as the protein membrane. Researchers use ionizing radiation to produce various types of vaccines and in sterilization processes. Although this method is suitable for sterilizing biological samples or producing inactivated vaccines, it is limited to the environment and personal protective equipment (PPE). Ionizing radiation such as X-rays and Gamma-ray has been widely used in medical sciences, such as radiology, in the diagnosis of diseases and treatment.

Energetic photons, including gamma rays, X-rays, and UVC light, can release energy when interacting with coronaviruses. They damage the viral genome directly by radiolytic cleavage of genetic material or indirectly by the action of radicals on viral nucleic acids. Certain intensities of X-ray, gamma-ray, and UVC light could be used to inactivate SARS-CoV-2 virus replication and proliferation in COVID -19 patients.

Neutron beams are high-energy and are often used to sterilize viruses, as neutron radiation is about ten times more effective than gamma rays in inactivating viruses. Neutron beams are high-speed nuclear particles (hundreds or even thousands of meters per second) that have an extraordinary ability to penetrate materials. Neutron sources are typically radioisotopic neutron sources and monoenergetic neutron generators.

Blue light is considered high-energy visible (HEV) light. It is sometimes further broken down into blue-violet, harmful blue, and blue-turquoise light. Like ultraviolet radiation, high-energy visible blue light has both benefits and risks. There is some concern about the long-term effects of blue light from digital devices on the health of our eyes. More research is needed to determine how much blue light radiation from sunlight and digital devices is “harmful blue light” to the retina.

The researchers reviewed the rapid advances in physical irradiation methods for viral inactivation. The review deciphered the mechanisms for each innovative method, discussed the key parameters and showcased the recent validation experiments toward efficient viral inactivation. It has already led to a range of new tools and devices developed with improved performance. Through detailed analysis, they showed that new advances in the characterization of viral genome and proteins during irradiation would be the key to a better understanding of the mechanism and quantifying each key parameter for efficient viral inactivation without harmful side effects to humans and the environment.

Looking at light radiation to halt viruses in their track 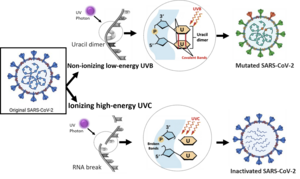 Exposure of virus to UV light in low or high energy level leads in nonionizing or ionizing radiations, respectively.