TORONTO, ON, CANADA (September 29, 2022) – Using the James Webb Space Telescope (JWST), researchers from the CAnadian NIRISS Unbiased Cluster Survey (CANUCS) team have identified the most distant globular clusters ever discovered. These dense groups of millions of stars may be relics that contain the first and oldest stars in the universe.

The early analysis of Webb’s First Deep Field image, which depicts some of the universe’s earliest galaxies, is published today in The Astrophysical Journal Letters.

“JWST was built to find the first stars and the first galaxies and to help us understand the origins of complexity in the universe, such as the chemical elements and the building blocks of life,” says Lamiya Mowla, Dunlap Fellow at the Dunlap Institute for Astronomy & Astrophysics at the University of Toronto and co-lead author of the study. “This discovery in Webb’s First Deep Field is already providing a detailed look at the earliest phase of star formation, confirming the incredible power of JWST.”

In the finely detailed Webb’s First Deep Field image, the researchers zeroed in on what they’ve dubbed “the Sparkler galaxy,” which is nine billion light years away. This galaxy got its name for the compact objects appearing as small yellow-red dots surrounding it, referred to by the researchers as “sparkles.” The team posited that these sparkles could either be young clusters actively forming stars — born three billion years after the Big Bang at the peak of star formation — or old globular clusters. Globular clusters are ancient collections of stars from a galaxy’s infancy and contain clues about its earliest phases of formation and growth.

From their initial analysis of 12 of these compact objects, the researchers determined that five of them are not only globular clusters but among the oldest ones known.

“Looking at the first images from JWST and discovering old globular clusters around distant galaxies was an incredible moment, one that wasn’t possible with previous Hubble Space Telescope imaging,” says Kartheik G. Iyer, Dunlap Fellow at the Dunlap Institute for Astronomy & Astrophysics at the University of Toronto and co-lead author of the study. “Since we could observe the sparkles across a range of wavelengths, we could model them and better understand their physical properties, like how old they are and how many stars they contain. We hope the knowledge that globular clusters can be observed at from such great distances with JWST will spur further science and searches for similar objects.”

The Milky Way galaxy has about 150 globular clusters, and how and when exactly these dense clumps of stars formed is not well understood. Astronomers know that globular clusters can be extremely old, but it is incredibly challenging to measure their ages. Using very distant globular clusters to age-date the first stars in distant galaxies has not been done before and is only possible with JWST.

“These newly identified clusters were formed close to the first time it was even possible to form stars,” says Mowla. “Because the Sparkler galaxy is much farther away than our own Milky Way, it is easier to determine the ages of its globular clusters. We are observing the Sparkler as it was nine billion years ago, when the universe was only four-and-a-half billion years old, looking at something that happened a long time ago. Think of it as guessing a person's age based on their appearance — it’s easy to tell the difference between a 5- and 10-year-old, but hard to tell the difference between a 50- and 55-year-old.”

Until now, astronomers could not see the surrounding compact objects of the Sparkler galaxy with the Hubble Space Telescope (HST). This changed with JWST's increased resolution and sensitivity, unveiling the tiny dots surrounding the galaxy for the first time in Webb’s First Deep Field image. The Sparkler galaxy is special because it is magnified by a factor of 100 due to an effect called gravitational lensing — where the SMACS 0723 galaxy cluster in the foreground distorts what is behind it, much like a giant magnifying glass. Moreover, gravitational lensing produces three separate images of the Sparkler, allowing astronomers to study the galaxy in greater detail.

“Our study of the Sparkler highlights the tremendous power in combining the unique capabilities of JWST with the natural magnification afforded by gravitational lensing,” says CANUCS team lead Chris Willott from the National Research Council’s Herzberg Astronomy and Astrophysics Research Centre. “The team is excited about more discoveries to come when JWST turns its eye on the CANUCS galaxy clusters next month.”

The researchers combined new data from JWST’s Near-Infrared Camera (NIRCam) with HST archival data. NIRCam detects faint objects using longer and redder wavelengths to observe past what is visible to the human eye and even HST. Both magnifications due to the lensing by the galaxy cluster and the high resolution of JWST are what made observing compact objects possible.

The Canadian-made Near-Infrared Imager and Slitless Spectrograph (NIRISS) instrument on the JWST provided independent confirmation that the objects are old globular clusters because the researchers did not observe oxygen emission lines — emissions with measurable spectra given off by young clusters that are actively forming stars. NIRISS also helped unravel the geometry of the triply lensed images of the Sparkler.

“JWST’s made-in-Canada NIRISS instrument was vital in helping us understand how the three images of the Sparkler and its globular clusters are connected,” says Marcin Sawicki, Canada Research Chair in Astronomy, professor at Saint Mary’s University and study co-author.  “Seeing several of the Sparkler’s globular clusters imaged three times made it clear that they are orbiting around the Sparkler galaxy rather than being simply in front of it by chance.”

JWST will observe the CANUCS fields starting in October 2022, leveraging JWST data to examine five massive clusters of galaxies, around which the researchers expect to find more such systems. Future studies will also model the galaxy cluster to understand the lensing effect and execute more robust analyses to explain the star formation histories.

Collaborating institutions include York University and institutions in the United States and Europe. The research was supported by the Canadian Space Agency and the Natural Sciences and Engineering Research Council of Canada. 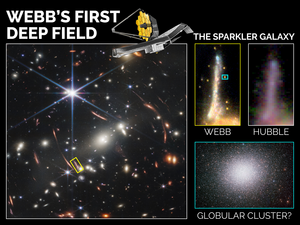 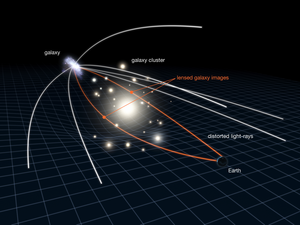 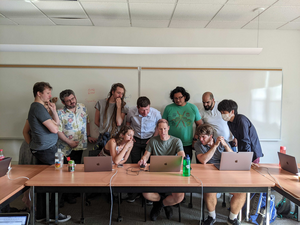 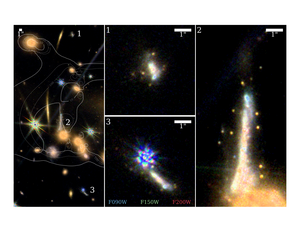 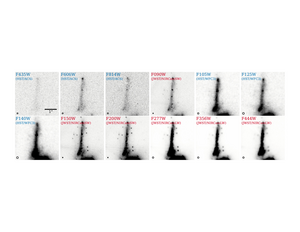 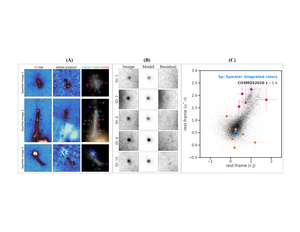