RSD, also called sexual racism, often manifests as website users expressing preferences for partners of certain races, ethnicities, physical attributes or stereotypical behaviors in their profiles. Accordingly, men of color say that other users often ignore their messages, reject them because of their race or ethnicity and engage in hate speech such as racial slurs.

The anonymity of online spaces prompts users to engage in more explicit and virulent racism than they might express when face-to-face, said the report’s first author, Ryan M. Wade, a social work professor at the University of Illinois Urbana-Champaign who studies RSD.

White men and men of color who use these sites often uphold white or Eurocentric features as the most desirable characteristics in intimate partners – a type of RSD the study called “white superiority.”

However, the types of RSD the study participants encountered differed depending on which of two popular dating apps – Grindr or Jack’d – they used, according to Wade and his co-author Matthew M. Pear, a graduate student in the same department. They reported their findings in the International Journal of Environmental Research and Public Health.

Men who experience RSD in online communities may be vulnerable to depression and other negative mental health effects, prior research – including a recent study led by Wade – has shown.

Wade developed a 52-item multidimensional scale that measures the impact of RSD across multiple contexts, accounting for the frequency and effects of these experiences and the perpetrators’ races. The National Institute on Minority Health and Health Disparities recently awarded Wade a grant of more than $293,000 to refine and validate the scale and further examine RSD’s impact on the psychological well-being of young men of color who also are sexual minorities.

Launched in 2009, Grindr markets itself as the largest social networking app for people in the LGBTQ community, with 11 million users around the world.

Jack’d promotes itself as the most inclusive virtual community for LGBTQ people. A similar dating app called Scruff acquired Jack’d in 2019. The parent company, Perry Street Software, states on its website that the two apps reach an aggregate total of 30 million users worldwide.

Wade said Perry Street Software touts the diversity of Jack’d users – purported to be 30% Black, 25% Asian and 25% Latino – as well as that of its management. According to the Jack’d website, its workforce spans 18 countries.

Participants in the study, who had an average age of 24, were recruited through posts on various online networking platforms. All of the participants indicated that they were assigned male sex at birth and identified primarily as gay or bisexual and as Black, African American, or similar races or ethnicities.

Most of the men – 97.6% – indicated that they used more than one website or dating app to find male partners for sexual activity. All lived in the U.S. and reported having used one of these types of dating apps within the previous three months.

Overall, participants said rejection by white men and white men expressing a desire for specific physical traits that are stereotypically associated with Black males were the forms of RSD they experienced most frequently from other members of online dating communities in general.

“However, between the two websites in this study, RSD manifestations differed significantly on three of the six subscales measured,” Wade said.

Men who primarily used Grindr reported more frequent instances of white men rejecting them because they were Black, and they also reported greater frequency of white superiority, such as white users specifying preferences for intimate partners who also were white.

Prior studies suggested that white superiority and white rejection are significantly more prevalent on Grindr. That may be due, at least in part, to differences in user demographics that increase the likelihood that men of color will be exposed to discriminatory behaviors, Wade said.

However, disparities in the prevalence of RSD also could arise from management companies’ differing prioritization and structuring of RSD interventions, according to the study.

In response to allegations of widespread racism, transphobia and other discriminatory practices on its site, several years ago Grindr officials launched a public relations campaign and website called “Kindr Grindr,” asserting that it was “time to play nice” and take measures to eliminate these toxic behaviors.

If a site’s managers “are beholden to shareholders, it could be that cracking down on certain things that occur in your space is not a profitable course of action,” Wade said.

When Scruff bought Jack’d, the parent company discontinued third-party advertising and external funding on Jack’d – a business model that may put administrators in a better position to proactively address RSD on their sites, Wade said. 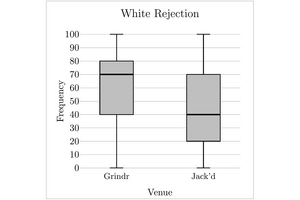