A new analysis of old data suggests that the endangered erect-crested penguin’s bizarre nesting habits – rejecting the first egg they lay – is because they can’t feed two chicks, and the second, larger egg has a better chance of success. Lloyd Davis of the University of Otago in New Zealand and colleagues describe these findings and their implications for penguin conservation in the open-access journal PLOS ONE on October 12, 2022.

Of all the penguin species, erect-crested penguins are the least studied, likely because they breed on two isolated island groups southeast of New Zealand, the Antipodes and Bounty Islands. What little we do know about them suggests that their numbers have declined sharply in the last 50 years. In 1998, Davis and two colleagues visited the islands to observe their highly unusual courting and egg laying habits. As these observations are still the most recent and most extensive data collected on erect-crested penguins, the researchers decided to extensively reanalyze the data to serve as a reference point for future studies and conservation efforts.

Erect-crested penguins engage in a reproductive habit called brood reduction where birds lay more eggs than they can rear. Erect-crested penguins lay a smaller first egg, followed by a larger second egg, around five days later. Davis and colleagues found that the first egg typically is lost from the nest either before, or soon after, the second egg is laid, and parents sometimes deliberately break or eject the egg. Furthermore, about 40 percent of mating penguin pairs do not incubate the first egg. Steady incubation occurs after laying the second egg and initially is mainly done by the females.

The researchers suspect that erect-crested penguins retain the reproductive habits of their ancestors, which laid and hatched two eggs. Current birds sacrifice the first egg, since they can’t provide enough food for two hatchlings. The first egg may be small because it forms as the female migrates to the island, while the second egg, formed on land, has fewer constraints and grows larger.

This odd behavior is accompanied by surprising fluctuations in hormone levels. An analysis of blood samples collected from the penguins showed that during laying, females had testosterone levels that were as high as the males. However, testosterone levels dropped in females during incubation and rose in males, which may help males protect the nest and guard the incubating females from bullying by other birds.

The researchers caution that unless erect-crested penguins receive greater research attention and conservation efforts, the species will continue to be poorly understood and ultimately, their very survival could be threatened. Evidence suggests that climate change is negatively impacting their breeding on the Antipodes Islands, with greater numbers of storms and mudslides in recent decades wiping out parts of colonies, killing nesting penguins. Additionally, changes in the ocean around the islands has already caused eastern rockhopper penguin populations in the region to crash, and is likely hurting the erect-crested penguin as well.

The authors add: “This study highlights the paradox that such an intriguing and endangered penguin species should be so little known in this day and age that the best data we have comes from nearly a quarter of a century ago. There is an urgent need for more research and better conservation marketing of this remarkable species.”

In your coverage please use this URL to provide access to the freely available article in PLOS ONE: https://journals.plos.org/plosone/article?id=10.1371/journal.pone.0275106

Funding: LSD received a New Zealand Lotteries Board Grant to support this research. https://www.govt.nz/organisations/new-zealand-lottery-grants-board/. The funders had no role in study design, data collection and analysis, decision to publish, or preparation of the manuscript. 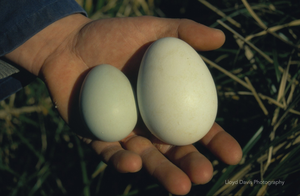 The difference in sizes of eggs within a clutch of erect-crested penguins is the largest for any bird.