A new discovery about how cells make antibodies has revealed the surprisingly random way the body’s immune system defends against infection and disease.

The study, led by researchers at WEHI in Melbourne, Australia, showed cells responsible for making antibody proteins use a randomisation process to determine which type of antibody to make, behaviour that scientists have dubbed ‘molecular roulette’.

Researchers have leveraged the critical insights to create a formula for predicting this allocation process, in a major step towards understanding why some people are biologically prone to developing diseases like asthma, autoimmune conditions and infections.

Antibodies are produced by immune cells to protect our body against disease by alerting the immune system to foreign invaders, like pathogens and viruses.

B cells are a type of immune cell (also known as B lymphocytes) that produce five different classes of antibodies, each tailored to defend the body against a specific bug – including bacteria and parasites.

Chief investigator Professor Phil Hodgkin said while understanding how cells use randomisation processes to make decisions has been a cornerstone of his work, discovering that B cells use a similar system when choosing antibodies was surprising.

“Instead of instructing every cell what to do as previously thought, our B cells are effectively running a little casino behind the scenes,” said Professor Hodgkin, Head of Immunology at WEHI.

“These immune cells are ultimately playing molecular roulette to allocate a certain number of cells to each antibody class, therefore triggering different outcomes through a game of chance.

“We have long known that B cells use a random gene shuffling process to make individual antibodies, but finding out that these cells deploy a general system to also choose the whole antibody class is a milestone discovery for the field.

“This finding is a significant step forward in understanding how these varying probabilities can impact individuals when it comes to their likelihood of developing certain diseases, while also broadening our understanding of how cells behave at the molecular level.”

The WEHI-led research, in collaboration with The University of Melbourne and the National University of Ireland’s Hamilton Institute, is published in Immunity.

Leveraging the mathematical expertise of their international colleagues and WEHI’s single-cell technologies, the team created a formula to better understand the B cell allocation process. The formula is based on a subset of well-defined molecules from the researchers’ models of infection.

First author Dr Miles Horton said the modelling brings the field the closest it has been to accurately predicting, for the first time, which antibody class a B cell will make, when the antibody will be made and whether a cell will choose to make a specific antibody class over another.

“This is crucial because we know that certain autoimmune conditions and infections can be triggered if this allocation process goes awry and if the wrong type of antibody is made,” he said.

“Our precise formula is a pivotal starting point in understanding how an individual’s molecular roulette tables (or genetic variations) can influence their predetermined likelihood of developing certain conditions, like asthma – a disease derived from a specific antibody class.”

Through this research, the team hopes to begin exploring how the immune system can be manipulated for therapeutic benefit in the future, to prevent this allocation process going wrong.

“Our ultimate goal is to go from a qualitative description of how the immune system behaves to a quantitative one, and this finding brings us a significant step closer to achieving that,” Dr Horton said.

The research was supported by the National Health and Medical Research Council (NHMRC), the European Union’s Horizon program and the Science Foundation Ireland. 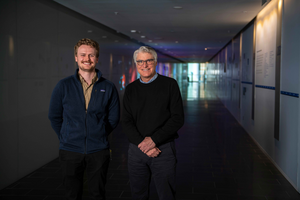