As urban environments continue to encroach on natural habitats, instances of human-wildlife conflict tend to increase. While some animals avoid human contact at all costs, other species thrive in urban habitats. Coyotes, in particular, have become frequent visitors near human settlements, and are generally regarded as a significant source of human-wildlife conflict. These urban predators have adapted to consume a range of human food sources, such as garbage, ornamental fruits, and domestic pets. As a result, city residents often worry about the safety of their pets, especially outdoor cats. Is it possible to minimize conflict between these two species in an urban setting?

Numerous studies throughout the United States from Seattle to New York have demonstrated that cats comprise less than 5% of coyote diet. Why then do diet studies in Los Angeles reveal that cats make up nearly 20% of coyote diet? Residents in Culver City, a suburb of Los Angeles, reported that 72 cats were killed in 18 months, allegedly the victim of coyote attacks. A recent study conducted by Rebecca Davenport and colleagues from the Center for Urban Resistance (CURes) at Loyola Marymount University may offer the first glimpse into this anomaly. The study, “Spatiotemporal relationships of coyotes and free-ranging domestic cats as indicators of conflict in Culver City, California,” was published in the peer-reviewed, scientific journal PeerJ – Life and Environment this month.

Davenport et al. (2022) installed 20 motion-sensor cameras in Culver City parks, neighborhoods, and green spaces to monitor the presence of cats and coyotes for six months. Similar to other studies, Davenport et al. found that coyotes prefer green spaces to urbanized and/or residential areas. However, cats did not display a preference for a particular habitat type. This result is quite surprising, as studies in Chicago and North Carolina found that cats prefer urban areas and directly avoid areas where coyotes are prevalent. Instead, cats in Culver City were present in the same green space fragments as coyotes. Additionally, cats in this Los Angeles suburb displayed more nocturnal behavior than is typical for urban cats. These unexpected results may explain why there have been such frequent cases of cat mortality in Culver City.

Residents have a common perception that coyotes intentionally hunt down pets within their neighborhoods. On the contrary, Davenport et al. (2022) suggest that coyotes tend to stick to natural areas around the city. Urban green spaces contain plenty of alternative prey sources for coyotes, such as cottontail rabbits. Therefore, it is unlikely that coyotes choose to leave their preferred green space habitat in order to seek out domestic pets. Instead, high rates of cat mortality in Culver City may be a result of cats roaming freely through urban green spaces and displaying increased nocturnality compared to cats in other cities.

Given that coyotes are perceived as a source of conflict in urban areas, countless management efforts focus on the control or eradication of “problem” coyotes. However, Davenport et al. (2022) recognize that coyotes are native to these environments, while domestic cats have been widely introduced to urban and rural areas across the United States. Unfortunately, cats have been shown to devastate populations of native species, such as songbirds and small mammals. Given these ecological consequences, Davenport et al. (2022) recommend that management efforts consider restrictions or control measures for outdoor cats, rather than solely focusing on the role of coyotes in urban human-wildlife conflict.

The CURes team has been studying urban coyotes in Culver City for three years and is currently preparing further analyses. For more information, you can read the article in PeerJ – Life and Environment https://peerj.com/articles/14169/

Spatiotemporal relationships of coyotes and free-ranging domestic cats as indicators of conflict in Culver City, California

Can cats and coyote co-exist? 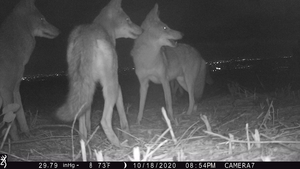 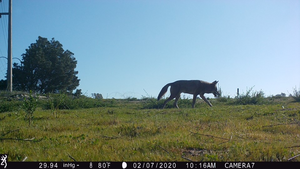 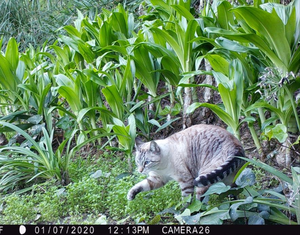 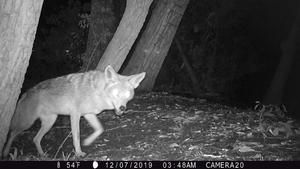