By documenting hundreds of new nectar plants for painted ladies, scientists have renewed hope these charismatic butterflies may prove resilient to climate change.

Every spring, swarms of the colorful butterflies can be spotted in Southern California as they make their way from western Mexico to the Pacific Northwest to breed. Some years, the number of migrating butterflies is in the millions.

Though they are a major North American butterfly species, there is a lack of baseline data to quantify a decline in painted ladies. However, scientists believe they are being negatively affected by hotter, drier weather and habitat loss.

“The lack of rainfall in Southern California likely impacts the butterflies’ ability to move through the state, potentially decreasing nectar sources and causing them to die without reproducing,” said Jolene Saldivar, UC Riverside ecologist who led this effort to identify new painted lady nectar plants.

“There’s so much to be learned about these butterflies before drought and climate change damage them irreparably,” Saldivar said. This study, which identifies 195 new nectar plants for the species, is now published in the journal Environmental Entomology.

To obtain this result, the UCR team sorted through more than 10,000 images of painted ladies in California shrublands, supplied by community scientists through the iNaturalist website. Any images in which the butterflies did not have mouth parts extended and were not obviously feeding were omitted from analysis, as were any images of caterpillars.

The newly discovered nectar sources may offer Southern California gardeners wanting to support the species a wide range of options.

“Much of what we identified could responsibly be planted during a drought,”      said Erin Wilson-Rankin, study co-author and UCR associate professor of entomology.

These butterflies also readily feed on showy ornamental plants common to California landscaping, such as lantana, butterfly bush and rosemary, as well as flowering weeds.

“It’s an uber generalist insect, not picky at all,” Saldivar said.

Painted lady caterpillars consume plants, but they are not known to eat any agriculturally important species, nor are they known spreaders of any illness. They serve as good sources of prey for insects, spiders, birds, wasps and reptiles, and mature butterflies can pollinate some of the many plants they visit.

“It might be getting tougher for painted ladies in some places, but these butterflies will feed on what flowers are available — even a few plants in a window box could help them,” Wilson-Rankin said.

Saldivar says she believes the results of this paper may encourage community scientists, whose contributions to knowledge should be celebrated and promoted.

“Adding a photo and a little information to a community science website or through an app on your smartphone might seem minor, but in the big picture, it helps inform us about ecological processes we’d otherwise be very challenged to learn about,” Saldivar said. 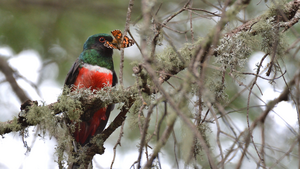