Korea Institute of Fusion Energy (KFE) and Seoul National University (SNU) research team announced that they have discovered a new plasma operating mode that can improve plasma performance for fusion energy based on an analysis of plasma operations with ultra-high temperatures over 100 million degrees (Celsius) at the Korea Superconducting Tokamak Advanced Research (KSTAR).

To generate energy through a fusion reaction as occurs in the sun, it is essential to confine super hot and dense plasma in a fusion reactor stably and for long. To secure such a technology, worldwide fusion energy researchers have worked to find the most efficient plasma operating mode through theoretical and experimental studies.

One of the most widely known operating modes is H-mode (High confinement mode). It has been considered the primary plasma operating method for fusion reactors, thereby serving as a benchmark for developing next-generation operating modes.

The main downside of this H-mode, however, is the appearance of plasma instability, the so-called edge-localized mode (ELM) in which the pressure at the edge plasma exceeds the threshold, bursting the plasma like a balloon. Since this can cause damage to the inner walls of a reactor, researchers have been exploring various ways to control the ELM, while trying to develop a more stable plasma operating mode.

By analyzing experimental data of KSTAR operations and analyzing them through simulations, KFE and SNU researchers found that the fast ions, or the high-energy particles generated due to external heating, stabilize the turbulences inside the plasma, resulting in a dramatical increase in the plasma temperature. This newfound plasma regime has been coined “Fast Ion Regulated Enhancement (FIRE) mode“.

Since FIRE mode can improve the plasma performance compared to the H-mode while generating no ELM and providing easier operational control, it expects to open up new possibilities in developing plasma operation technology for commercial fusion reactors down the road, as well as contribute to the operation of the International Thermonuclear Experimental Reactor (ITER). Nature published these new findings on September 8.

“FIRE mode came as a work of creativity while analyzing the reasons for failing to achieve the desired results in experiments. A failure guided a new discovery. This shows the quite novel and unique research in KSTAR for fusion energy development in Korea,” said Prof. Yong-soo Na, the corresponding author of the study. "This finding was made possible thanks to the close cooperation between the KFE and universities in and outside of Korea, as well as to KSTAR that was built to the finest level with very low magnetic effor field." he added.

"There are three elements to consider in making fusion reactions; density, temperature, and confinement time. Among those three, we took a new approach to focus on the temperature. To be specific, by concentrating the KSTAR’s heating capabilities to the core of the plasma at low density, we were able to develop FIRE mode,” said Dr. Hyunsun Han, the first author of the paper. “We plan to enhance KSTAR’s plasma performance and operation time at over 100 million degrees Celsius by studying further on the FIRE mode and fast ions,” he explained. 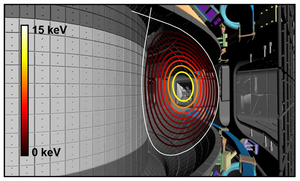 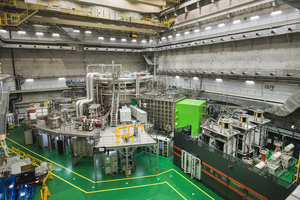