The complexity of life on earth was derived from simplicity: from the first protocells to the growth of any organism, individual cells aggregate into basic clumps and then form more complex structures. The earliest cells lacked complicated biochemical machinery; to evolve into multicellular organisms, simple mechanisms were necessary to produce chemical signals that prompted the cells to both move and form colonies.

Replicating this behavior in synthetic systems is necessary to advance fields such as soft robotics. Chemical engineering researchers at the University of Pittsburgh Swanson School of Engineering have established this feat in their latest advancement in biomimicry.

The research, “Lifelike behavior of chemically oscillating mobile capsules”, was published in the Elsevier journal Matter (doi.org/10.1016/j.matt.2022.06.063). Lead author is Oleg E. Shklyaev, post-doctoral associate with Anna Balazs, Distinguished Professor of Chemical and Petroleum Engineering and the John A. Swanson Chair of Engineering.

“We utilized a computer model involving red, blue, and green capsules. With addition of appropriate reactants, each capsule triggers one of three interconnected reactions that convert the reactants into products. If the volume of the reactants is different from the products (as is frequently the case in bio-catalytic reactions), the fluid will encompass density gradients, which spontaneously generate buoyancy forces. The forces drive the flow of the surrounding solution and propel the immersed capsules.

Because of this dynamic behavior, the capsules are always experiencing new chemical environments and neighbors. If the moving capsules lie too far apart, the “networking” amounts to an exchange of constant chemical signals, allowing the capsules to “know" about the presence of others,” Shklyaev explains. “If, however, the flow brings the three different types of capsules sufficiently close to each other, their chemical “communications” become more involved, leading the “triad” to undergo spatial and temporal chemo-mechanical oscillations.

Namely, the simple system that initially featured time-independent exchange of chemical signals, self-organizes into a colony that displays chemo-mechanical oscillations, similar to the oscillations of the chemoattractant cAMP in colonies of ameba or even the periodic beating of a living heart. The system shows life-like autonomy because the “fuel” for the capsules’ motion is self-generated and in turn, the spontaneous motion of the fluid prompts the capsules’ communications and biomimetic, collective oscillations. With reactants to instigate the catalysis, the rest of the processes are accomplished by the system itself.

The specific interlinked reactions acting on the model capsules form a bio-inspired negative feedback loop (the “repressilator”), where each capsule suppresses chemical production by the next one in the loop. The repressilator model was used to successfully simulate and further understand communication (quorum sensing) in colonies of bacteria. In the “dormant” state, when capsules are sufficiently far from each other, the capsules coupled through the feedback loop do not exhibit oscillations, but rather produce constant chemical output and translational motion through the fluid. Eventually, the moving capsules come into contact with new neighbors and form a colony that exhibits a biomimetic collective response: an oscillatory chemical signal accompanied by the mechanical oscillations of the constituent parts.

Balazs notes that while their microcapsule system does not encompass any motives, it appears to replicate fundamental biological functions due to the simple rules imposed on the system and the introduction of reactants (nutrients) into the solution. In other words, the seemingly complex chemo-mechanical oscillations can result from simple mechanisms that occur inherently in chemical solutions.

“When developing remote systems and tiny machines, you want the systems to be as autonomous as possible, operating without the need for complex programming and hardware,” she said. “We have shown that simple chemical processes coupled to buoyancy forces, which arise naturally in chemical solutions, provide the instructions for particles to form complex systems and movements, potentially, just as with the earliest forms of life.” 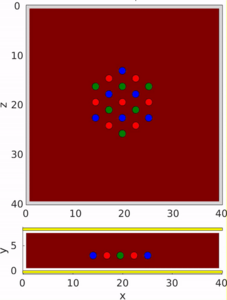 Chemo-mechanical oscillations (from overhead and from side)