The Royal Swedish Academy of Sciences has awarded the 2022 Nobel Prize in Chemistry to Carolyn Bertozzi, Morten Meldal, and K. Barry Sharpless “for the development of click chemistry and bioorthogonal chemistry.”

Bertozzi, a professor of chemistry at Stanford University, is the eighth woman to be awarded the prize. From 1996 to 2015, before joining Stanford, she was a faculty scientist at the Department of Energy’s Lawrence Berkeley National Laboratory and a UC Berkeley professor. She also served as the director of the Molecular Foundry, a DOE Office of Science nanoscience user facility located at Berkeley Lab, from 2006 to 2010.

According to today’s Nobel Prize announcement, “The Nobel Prize in Chemistry 2022 is about making difficult processes easier. Barry Sharpless and Morten Meldal have laid the foundation for a functional form of chemistry – click chemistry – in which molecular building blocks snap together quickly and efficiently. Carolyn Bertozzi has taken click chemistry to a new dimension and started utilising it in living organisms.”

"Carolyn Bertozzi had a profound impact at Berkeley Lab, not only through her brilliant science, but as someone who created new institutions that encouraged team science,” said Berkeley Lab Director Mike Witherell.

By pioneering a method for mapping biomolecules on the surface of cells, Bertozzi helped create a suite of techniques comprising “bioorthogonal chemistry,” a term Bertozzi coined, which means “not interacting with biology.” The method describes chemical reactions that allow scientists to explore cells and track biological processes without disrupting the normal chemistry of the cell.

Bertozzi’s lab first developed the method in the late 1990s and early 2000s. During that time, she was one of the six scientists who helped establish the Molecular Foundry, a nanoscience research facility that provides scientists from around the world access to cutting-edge expertise and instrumentation. She served as the Molecular Foundry’s director when the facility first opened its doors to the research community in 2006, and she founded the Foundry’s Biological Nanostructures Facility, where scientists study the synthesis, analysis and mimicry of biological nanostructures.

“Carolyn Bertozzi’s impact on nanoscience is huge,” said Jeff Neaton, associate laboratory director of Berkeley Lab’s Energy Sciences Area. “The chemistry she developed paved the way for the science and engineering of living-nonliving interfaces, a frontier of nanoscience which also became a major theme of the Foundry.”

Under Bertozzi’s leadership, the Foundry grew immensely, bringing in scientists from across the disciplines. This multidisciplinary approach inspired collaborations with visiting scientists, including longtime Foundry user K. Barry Sharpless, co-recipient of the Nobel Prize in Chemistry with Bertozzi and Morten Meldal.

“Carolyn put the Foundry on the map,” said Bruce Cohen, a staff scientist in the Foundry’s Biological Nanostructures facility since 2006. “She oversaw the opening of the facility, which is a major administrative and scientific feat."  He added that Bertozzi's "science is so creative and original, as well as technically on point, and it's opened up entire new areas of study. This is a well-deserved Nobel Prize. I couldn’t be happier for her."

Cohen said that Bertozzi is also "a great mentor to all of the scientists around her, and has always been an inspirational role model for both women and LGBTQ people in science."

Bertozzi and others have used her methods to answer fundamental questions about the role of sugars in biology, to study how cells build proteins and other molecules, to develop new cancer medicines, and to produce new materials for energy storage, among many other applications.

The Nobel committee said in a statement that “click chemistry and bio-orthogonal reactions have taken chemistry into the era of functionalism,” adding that “this is bringing the greatest benefit to humankind.”

Among her many awards, Bertozzi is a recipient of the 2014 Ernest Orlando Lawrence Award, the Department of Energy’s highest scientific honor. She was named a MacArthur Fellow in 1999. She won the Wolf Prize in Chemistry in 2022.

Bertozzi completed her undergraduate degree in chemistry at Harvard University and her Ph.D. at UC Berkeley. She has been a Howard Hughes Medical Institute Investigator since 2000. She joined Stanford in 2015. 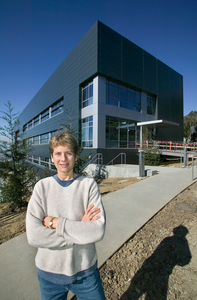 Carolyn Bertozzi at the Molecular Foundry