The hypothesis states that insect flower pests can become useful pollinators during the course of evolution. Botanists call this "antagonist capture", meaning that plants are able to turn a harmful insect into a pollinator through evolutionary adaptations in their flowers or inflorescences. This theory has now been confirmed for the first time in Syngonium hastiferum, an aroid plant (arum family, Araceae) from Costa Rica. The investigation, which also brought to light a completely new pollination system and a previously unknown flower scent compound, was published in the journal "Current Biology".

While all other members of the genus Syngonium studied so far are pollinated by nocturnal beetles, Syngonium hastiferum is exclusively pollinated by a hitherto unknown diurnal plant bug species. Interestingly, plant bugs also occur as flower visitors in beetle-pollinated aroids, but only as pests that eat pollen and flower tissue and thus damage the plants without pollinating them.

Flowers and inflorescences of Syngonium hastiferum differ in various characteristics from closely related but beetle-pollinated species. For example, the inflorescences of Syngonium hastiferum warm up in the early hours of the morning through a process called thermogenesis and, at the same time, emit a strong floral scent, attracting pollinating plant bugs during the day. In the beetle-pollinated species, these processes take place in the evening and accordingly, pollinating beetles are attracted during the night. In addition, Syngonium hastiferum lacks the usual food bodies for beetles and the surface of the pollen grains has also changed from smooth and sticky to spiny and powdery, which is what makes it possible for the pollen grains to adhere to the plant bugs.

There were also significant changes in the composition of the flower scent, which is crucial for attracting the plant bugs. While inflorescences of Syngonium hastiferum smell similarly intense as those of beetle-pollinated aroid species, their scent is composed of other chemical substances. The researchers have discovered a previously unknown substance as the main component of the scent of Syngonium hastiferum. The unknown compound was decoded using nuclear magnetic resonance spectroscopy, paving the way for another important step in the study: the chemical synthesis of the new natural substance in order to be able to test the attraction of the substance to the plant bugs. In Costa Rica, this synthetic product has attracted as many pollinating bugs as the plant's inflorescences. The researchers are thus sure that this substance is solely responsible for attracting the plant bugs. The newly described substance was named ‘gambanol’ in recognition of the Tropical Field Station La Gamba in Costa Rica, where the new pollination system was discovered.

The study offers a new perspective on the evolution of flowering plants and the spectacular diversity of their flowers and their pollinators by providing the first evidence that pest insects can become efficient pollinators through changes in the flowers. Future studies will have to show whether similar changes also occurred in other flowering plant lineages.

Evidence for the recruitment of florivorous plants bugs as pollinators

From foe to friend: Harmful insects can become pollinators 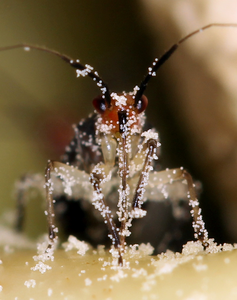 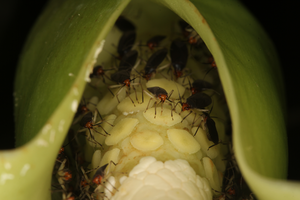