WEHI researchers have revealed that common liver diseases are not driven by inflammatory cell death as previously thought, resolving a long-standing controversy in gastroenterology and pointing to a new direction for treatment.

The research team studied liver diseases that affect billions worldwide, including non-alcoholic fatty liver disease and hepatitis B, to understand what drives their progression.

Their unexpected finding − that liver cells are unable to undergo an inflammatory form of cell death called ‘necroptosis’ − resolves crucial unanswered questions in the field and will help guide the development of new therapeutic interventions.

The findings, published in Gastroenterology, offer clarity on the heavily debated role of necroptosis in the progression of liver pathologies, and provide fundamental insights to guide future pre-clinical and clinical studies in a new direction.

The study was led by chief investigator Dr Marcel Doerflinger, former WEHI PhD researcher Dr Simon Preston and principal investigator Professor Marc Pellegrini, in collaboration with researchers from the Peter Doherty Institute for Infection and Immunity and the University of Queensland.

Liver diseases are a significant and growing global health burden. Non-alcoholic fatty liver disease is the most common liver disease, affecting over 30 per cent of the world’s population, while over 296 million people are infected with Hepatitis B globally.

To date, researchers have considered necroptosis as critical in the progression of these diseases.

However, it was unclear whether this mode of cell death was occurring in liver cells, or in immune cells that had infiltrated the liver in response to infections or diet-related damage.

“We sought to address this research gap and define the role and relevance of necroptosis in common liver diseases,” said study lead Dr Doerflinger.

The team deleted key genes required for necroptosis from liver cells known as ‘hepatocytes’ to observe the effects on disease development.

They found that deleting these genes had little effect, with disease progression proving comparable to normal hepatocytes. This revealed that necroptosis was not involved in the development of these liver pathologies.

“The liver is a vital organ due to its function in the body’s metabolism and detoxification,” Dr Doerflinger said.

“It’s unclear why necroptosis is repressed in liver tissue, but we speculate it may be because the liver is constantly bathed in necroptotic signals such as gut microbial products, so limiting necroptosis could potentially protect the liver from excessive inflammation.”

The research also revealed the molecular mechanisms responsible for the inability of liver cells to undergo necroptosis.

Production of RIPK3 protein was restricted at the genetic level, where the RIPK3 gene was blocked by a type of epigenetic modification known as ‘methylation’.

“As a result, without this essential protein to carry out its necroptotic function, the cell death pathway can’t be initiated.”

Dr Doerflinger said momentum had been growing in the development of inhibitors of RIPK3 for the potential treatment of liver diseases, but their potential clinical applicability had been limited by a lack of fundamental insights.

“These findings are a central piece of data that address many unanswered questions in the field that will guide future pre-clinical trials and clinical studies in this direction,” he said.

The research was supported by the NHMRC and biotechnology start-up Anaxis Pharma Pty Ltd. It was performed in collaboration with Anaxis Pharma and Servier, a global pharmaceutical group.

The study, “Epigenetic silencing of RIPK3 in hepatocytes prevents MLKL-mediated necroptosis from contributing to liver pathologies”, is published in Gastroenterology (DOI: 10.1053/j.gastro.2022.08.040). 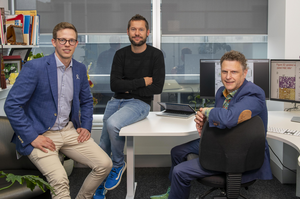