Denver, Colo., USA: Great Salt Lake is well known for being salty, but record-low water levels driven by high water usage and several years of drought may soon make it too salty for even the brine shrimp that have made it a home. The lake provides an important source of food for migrating birds and supports a multi-million-dollar brine shrimp industry, both of which could be lost if water levels don’t rebound soon. Carie Frantz of Weber State University has spent the last several summers studying the lake with teams of undergraduate researchers, checking on the health of microbialite reefs that form the bedrock of the lake’s ecosystem. Frantz will share their findings at the GSA Connects meeting in Denver this Sunday, 9 October.

Great Salt Lake’s microbialites are rocky mounds built by mats of microbes that create carbonate minerals—the same basic constituent of limestone. Microbes in the reef, like algae and cyanobacteria, perform photosynthesis—providing the nutritional basis for the rest of the lake’s ecosystem. Brine flies lay their eggs on the reefs, and both the brine shrimp and brine flies—two of the biggest populations at the lake—feed from the reefs. Because the lake is too salty for fish, there are few predators, so the lake can become dense with the flies and shrimp, which then feed a large population of both migrating and resident birds. As lake levels have dropped, previously underwater reefs have become exposed to the air, causing the aquatic microbial communities to die off. As the microbes die, the reefs become bleached—changing color from dark green to white.

In 2021, Frantz and her students found evidence that the microbialite reefs might be resilient to the negative impacts of low water levels and be able to recover from bleaching, but the same experiments in 2022 cast doubt on that hopeful outlook. Students experimented with re-submerging bleached microbialite pieces into the lake by putting them in mesh bags attached to an underwater pipe. Even microbialites that looked dead still contained living microbes that recolonized the microbialite pieces when they were submerged back into the water—and this recovery was quick, with exponential growth of microbes, hinting that full recovery might be possible within several months. When they repeated the experiment in 2022, however, they did not see the same quick recovery.

Frantz attributes this change from 2021 to 2022 to increased salinity. As the water level keeps dropping, the lake keeps getting saltier. In 2021, she saw salinity levels as high as 18%, already above what is considered healthy for the Great Salt Lake ecosystem, which is typically 12–15% salinity. In 2022, she saw those measurements climb above 19% in open water areas and reach as high as 26% within the reef she and her students monitor (for reference, the ocean has a salinity of ~3.2%; salt precipitates from Great Salt Lake water at a salinity of ~27%).

Frantz explains, “Last year, it was really encouraging, because we saw that they can come back, and they come back fast. This year we saw something very different, we don’t see that clear increase we saw last year. The organisms are stressed at these salinity levels. It’s possible it’s just too high for them to grow.”

In the 1950s, the Great Salt Lake was split into northern and southern halves by the building of a railroad causeway. Because most of the fresh water coming into the lake goes to the southern portion, the north section experienced a mass die-off of photosynthetic microbes that can be observed from space—emanating a pink hue produced by the few salt-loving microbes that can survive its hypersaline water, which exceeds 25% salinity. The southern half of the lake may suffer the same fate if more water isn’t brought into the system soon. Frantz estimates that without major interventions, it could be a matter of months to a few more years before the ecosystem collapses. Scientists monitoring brine shrimp and brine flies in open water areas of the lake have already begun to report worrisome trends in the behavior of brine shrimp, brine fly larvae, and the birds that rely on them.

Some legislative measures have been taken in the past year to attempt to secure water rights for Great Salt Lake, but Frantz worries it won’t be enough to prevent a collapse, saying “It’s a slow shift in response to an emergency—we’re not acting as fast as the situation calls for.” 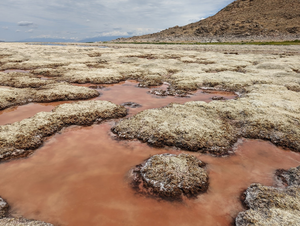 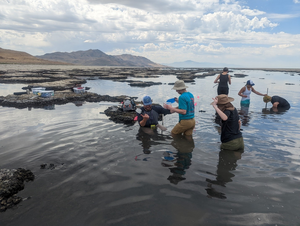