The scientific expedition to the Nord Stream leak from the University of Gothenburg has arrived back home. The researchers discovered that the methane levels near the leak were about 1,000 times higher than normal, but it's too early to draw any conclusions from that discovery. The researchers have brought back heaps of samples to analyse.

After five days at sea, the research vessel Skagerak is back home in Gothenburg. The hastily organised expedition to the Nord Stream leaks in the Baltic Sea is over, and the researchers are content with their efforts.

“Everything has gone incredibly well, considering the short preparation time. In less than 48 hours, we got the researchers and equipment we wanted onboard,” says Katarina Abrahamsson, marine chemist at the University of Gothenburg, and coordinator for the expedition.

The methane gas leak was discovered on 26 September, and since then methane gas has continued to leak into the water. It was essential for the researchers to get to the area quickly to measure the effects of this large discharge, and to collect important data, says Abrahamsson. During a period of 54 hours, the expedition took 100–200 water samples.

“In order to map the spread of the methane in the water, we had 20 different measurement locations at intervals of approximately 9–18 kilometres. At our assistance, we had researchers and equipment from the Alfred Wegener Institute in Germany. They have the knowledge to separate the pipeline methane from what occurs naturally, says Katarina Abrahamsson.

What did you see?

“In the water samples, we could see that the methane levels were up to 1,000 times higher than normal. Also, the distribution pattern of the methane from the leak was complicated and difficult to explain. A reason for this could be that we couldn’t measure the entire discharge, because the vessel was only permitted to go in Swedish waters. We simply didn’t have time to seek permission from Denmark,” says Katarina Abrahamsson.

Methane gas is dissolved in water, but when it reaches the surface, it transforms back to gas form and is emitted into the atmosphere. For how long the elevated levels of methane remain in the Baltic Sea depends on the currents, and when the leakage stops.

It’s unclear what kind of effect these high methane levels could have on marine life. For example, there are bacteria in the water that can oxidize methane gas to grow and multiply.

“I have filtered water samples during the expedition to see if there’s now been a growth of these types of bacteria when there are elevated methane levels in the water,” says Carina Bunse, marine biologist at the University of Gothenburg.

Could it affect biological life in the Baltic Sea?

“It’s autumn now, and soon it will be low season for phytoplankton and zooplankton. It could affect the food web locally if these methane-eating bacteria grow at the expense of other plankton species. But we can’t foresee the results. Before we can draw any conclusions, we have to make DNA analyses of the content in the water samples,” says Carina Bunse.

Now, Skagerak is back in Gothenburg, and the researchers have a gigantic workload before them. Before anything could be said with certainty concerning the impact from the Nord Stream emissions on marine life in the long run, the water samples and measurements must be analysed and discussed. But the researchers are already making plans for new expeditions to the waters east of Bornholm.

“We now need to get an overview of our results, and then summarise them in an initial scientific paper. With a little luck, that could be published before the end of the year, says Katarina Abrahamsson.

High levels of methane in the Nord Stream leak area 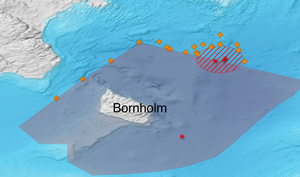