East Hanover, NJ – October 7, 2022 – Employment numbers were positive for people with disabilities, who continued to enter the labor force in September while labor force participation remained unchanged for people without disabilities, according to today’s National Trends in Disability Employment – Monthly Update (nTIDE), issued by Kessler Foundation and the University of New Hampshire’s Institute on Disability (UNH-IOD). nTIDE experts also noted that the employment-to-population ratio for people with disabilities continued to trend above previous historic highs.

“The trend in the employment-to-population ratio for people with disabilities continues for the thirteenth consecutive month at levels consistently above the historic highs seen in 2008,” said John O’Neill, PhD, director of the Center for Employment and Disability Research at Kessler Foundation. “This is encouraging for now considering that the Federal Reserve continues to raise interest rates to dampen economic growth, which will most likely curtail future hiring.”

“As a group, people with disabilities are not partaking in the Great Resignation,” remarked Andrew Houtenville, PhD, professor of economics and the research director of the UNH-IOD. “They are entering or reentering the labor force. While this could be seen as a positive sign of a more inclusive work force, it could be signaling the need to boost household income in the face of rising prices,” explained Dr. Houtenville.

IMPORTANT: No Lunch & Learn Webinar on October 7! Join us for our next webinar on October 21. Register now for this Special Edition webinar: “Effects of COVID-19 Pandemic on Supervisor Perspectives: Comparing the workplaces of 2022 and 2017,” with experts from Kessler Foundation, UNH-IOD, and SHRM Foundation. Learn first-hand about top-line findings from our latest survey: 2022 Kessler Foundation National Employment and Disability Survey: Supervisor Perspectives, which offers new insights into the effects of the COVID-19 pandemic on the experiences of employees with disabilities.

NOTE: The statistics in the nTIDE are based on Bureau of Labor Statistics numbers but are not identical. They are customized by UNH to combine the statistics for men and women of working age (16 to 64). nTIDE is funded, in part, by grants from the National Institute on Disability, Independent Living and Rehabilitation Research (NIDILRR) (90RT5037) and Kessler Foundation.

The Institute on Disability (IOD) at the University of New Hampshire (UNH) was established in 1987 to provide a university-based focus for the improvement of knowledge, policies, and practices related to the lives of persons with disabilities and their families. For information on the NIDILRR-funded Research and Training Center on Disability Statistics, visit ResearchOnDisability.org.

Kessler Foundation, a major nonprofit organization in the field of disability, is a global leader in rehabilitation research that seeks to improve cognition, mobility, and long-term outcomes – including employment – for people with neurological disabilities caused by diseases and injuries of the brain and 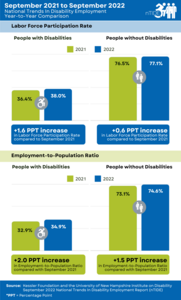