Denver, Colo., USA: Military personnel who were deployed in Afghanistan and Iraq may have been exposed to significant amounts of dust and other respiratory hazards, leading to persistent respiratory symptoms and diseases like asthma and bronchiolitis. Researchers from the U.S. Geological Survey (USGS) and National Jewish Health teamed up to investigate lung disease seen in previously deployed military personnel.

Heather Lowers, a research geologist at the USGS, will present findings looking at the characteristics of dust retained in the lungs of previously deployed military personnel Monday at the GSA Connects 2022 meeting in Denver.

“I never in my career thought I would be looking at human lung tissue,” said Lowers. “Through some previous work that we had done looking at first responders to the World Trade Center, we were connected with a team of pulmonologists and lung pathologists who were trying to better understand how inhaled particulate matter could cause lung injury. Several of my co-authors at National Jewish Health have a Department of Defense grant to look at what is causing some of the unexpected lung injury in people that were deployed to Iraq and Afghanistan.”

With funding support from the Department of Defense, National Jewish Health has built a clinic to evaluate previously deployed military personnel who were experiencing symptoms of lung injury. Lowers’ job as geologist on the project was to develop a method to extract and analyze particulate matter found in the lungs. Using techniques to produce high-resolution images of microscopic particles and characterize their elemental composition, Lowers evaluated the composition and size of inorganic particles found in the lungs.

Of the 250 deployers who came to the National Jewish Health clinic, 65 had a surgical lung biopsy as part of their clinical care, and 24 gave permission for their lung biopsy to be studied for this research. The lung biopsies of the 24 deployers were compared to 11 civilian control samples from donated lung specimens that matched the age and smoking history of the deployers.

“We found that generally speaking, the military deployers did have more retained dust in their lungs per cubic centimeter of tissue that we looked at compared to the controls. And the particles generally seemed to be a smaller size as well, compared to the dust that was retained in the control group,” said Lowers.

“In general, even when there are no dust storms, soldiers work in a pretty dusty environment. So we were looking at a culmination of all that would have been inhaled during their deployment,” said Lowers. “Even driving a truck across the desert floor, you’re going to kick up dust and breathe it in.”

While these analyses provide helpful insight into the lung injury seen in previously deployed military personnel, Lowers hopes that more samples can be studied to more fully evaluate the characteristics of retained dust in the lungs.

“One of the challenges I’ve learned working with human subjects is that it’s very difficult to get enough people enrolled in these studies. So, while we’re generally seeing differences between the controls and the deployers, the number of samples are limited,” said Lowers.

Based on the increased amount of dust that is found in the lungs of previously deployed military personnel, useful mitigation strategies will be needed to reduce deployers’ exposure to dust.

The Geological Society of America ( https://www.geosociety.org) unites a diverse community of geoscientists in a common purpose to study the mysteries of our planet (and beyond) and share scientific findings. Members and friends around the world, from academia, government, and industry, participate in GSA meetings, publications, and programs at all career levels, to foster professional excellence. GSA values and supports inclusion through cooperative research, public dialogue on earth issues, science education, and the application of geoscience in the service of humankind. 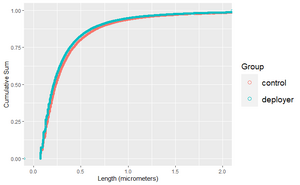