The unassuming Pacific mole crab, Emerita analoga, is about to make some waves. UC Berkeley researchers have debuted a unique robot inspired by this burrowing crustacean that may someday help evaluate the soil of agricultural sites, collect marine data and study soil and rock conditions at construction sites.

In a study published today in Frontiers in Robotics & AI, Hannah Stuart, assistant professor of mechanical engineering, and her team demonstrated one of the first legged robots that can self-burrow vertically. This digging robot, called EMBUR (EMerita BUrrowing Robot), uses a novel leg design to achieve downward motion that emulates the way Pacific mole crabs bury themselves in beach sand.

Mole crabs make burrowing look easy, but, according to Laura Treers, the study’s lead author and a Ph.D. student in mechanical engineering in Stuart’s Embodied Dexterity research group, it is difficult to move downward through granular media, like sand and soil. The deeper an animal digs, the harder the grains push back, impeding excavation.

To overcome this challenge and create a vertical-legged burrower, the researchers designed the legs of the robot to have an anisotropic force response, which means that they experience much greater force in one direction than another. Like a swimmer, the soft fabric legs of this robot expand for large forces during the power stroke, but fold and retract during the return stroke.

“There have been some recent advances in creating anisotropic legs for granular media, but this is the first time they have been implemented successfully on a free-burrowing robot,” said Treers.

The researchers also had to devise a way to prevent sand grains from entering the robot’s mechanisms and jamming them. They again turned to the Pacific mole crab for inspiration.

“We created a cuticle, which is analogous to the arthrodial membrane found on the mole crabs,” said Treers. “It’s a soft, flexible material that lines the openings of joints to prevent grains from getting inside but still allows free movement.”

Treers points out that, while robots have mastered such settings as land, space and sea, they have not made significant inroads underground. Very few robots, for example, can self-burrow under their own weight like EMBUR.

Robots capable of exploring subterranean settings could be used in a variety of industries and fields of study. Applications include gauging the soil quality of potential agricultural sites, geotechnical engineering, marine data collection, and construction and excavation. In addition, they could serve as small deployable anchors from marine vehicles or space rovers, to allow for tethered teamwork between robots.

EMBUR may also further our scientific understanding of other burrowing animals, which are difficult to observe and study underground. “Robophysical models, or robotic prototypes like EMBUR, can be tools to help biologists better understand the biomechanics of these animals,” said Treers.

To design the legs on EMBUR, Stuart and Treers worked with co-authors Robert Full, professor of integrative biology and of electrical engineering and computer sciences, and Benjamin McInroe, a Ph.D. student with the Biophysics Graduate Group, to observe and analyze mole crabs in the lab. They quickly realized that the animal’s five leg pairs can be split into two groups, which sweep in opposite directions to one another. They also noticed a pattern of insertion, sweeping and retraction, with the latter appearing to reduce drag on the return stroke. They then attempted to reproduce both features in the robot’s leg design.

Next, the researchers used physics models to estimate the forces on the legs, in order to help guide them in the robotic implementation.

“We used a modeling technique known as Resistive Force Theory [RFT] to model the forces experienced by the legs throughout their sweeping trajectories,” said Treers. “RFT helped us understand the kinds of robot geometries and behaviors that would allow for the most successful burrowing.”

Through EMBUR, the Berkeley researchers showed that vertical-legged burrowing is possible in dry media under the right conditions. They consider this a first step toward creating a system that can burrow under a wider range of conditions and types of substrates, like on a real beach.

“We plan to improve the design to allow for deeper digging and exploring better modeling methods, like DEM [Discrete Element Methods], to help predict the robot behavior,” said Treers. “Eventually, I’d love to have this robot be able to dig in real beach settings, like the animal, and switch between running, swimming and digging.”

This study was largely supported by an NDSEG (National Defense Science & Engineering Graduate) Fellowship from the Office of Naval Research (DoD), with additional funding from a NASA Early Career Faculty (ECF) grant. 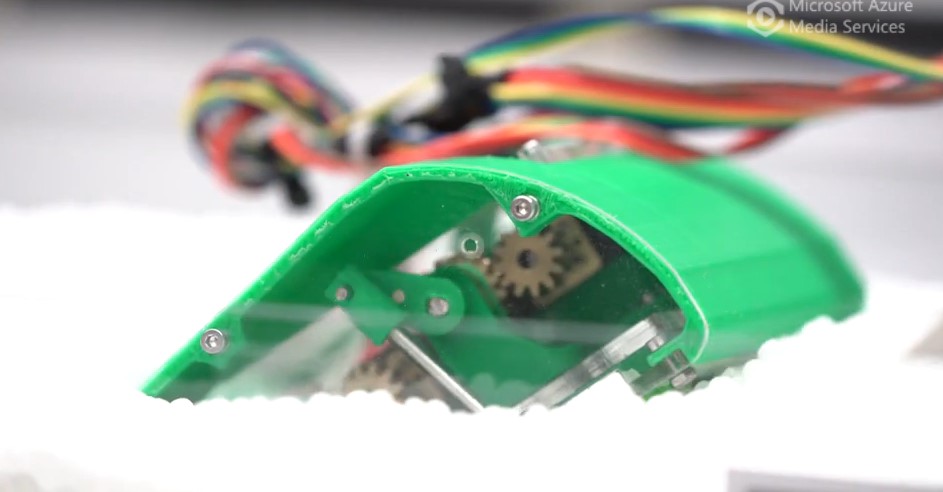 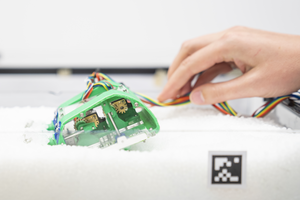