Denver, Colo., USA: Today, increasing levels of carbon dioxide in the atmosphere are warming up the planet. Climate change can disrupt the balance of ecosystems and contribute to endangerment and extinction of some species. New research suggests that a period of intense volcanism in the Central Andes may be the missing link in the story of past climate changes that led to the extinctions of ancient marine mammals. Mark Clementz and Barbara Carrapa will present their findings at the GSA Connects meeting in Denver tomorrow.

While we often hear about the important role human emissions of carbon dioxide play in the climate today, much of our understanding of current and future climate is rooted in Earth’s long history of variable climate. Many factors affect the carbon cycle—with carbon moving between the atmosphere, oceans, rocks, soil, and living things. Between 7.6 and 5.4 million years ago, the planet experienced a period of rapid cooling known as the Late Miocene Cooling Event. This was accompanied by massive changes to plant and animal communities both on land and in the oceans. Until recently, the cooling was attributed to carbon dioxide drawdown from the atmosphere by silicate weathering of the Himalayas.

Clementz and Carrapa propose a different contributing factor—a major increase in volcanism in the Andes around seven million years ago. They explain that the Andes were positioned to deliver ash to both the Pacific and Atlantic oceans—providing nutrients to global oceans that spurred an explosion of life. Small marine organisms called diatoms used these nutrients to thrive, and in turn, the marine mammals that fed on them, like baleen whales, also thrived. Given their massive size, large numbers of marine mammals could store a lot of carbon. By excreting their waste in shallow water, whales cycle nutrients back into those diatom communities, and the cycle continued to create what is known as a “biogenic bloom”—an explosion of life.

“But it may have been a case where they contributed to their own death,” explains Carrapa. Too many nutrients in the water can lead to toxic algae blooms, one possible stressor that contributed to the extinctions that followed this period of blossoming life. Another possibility is that ash from ongoing volcanism could have poisoned the air. Clementz and Carrapa plan on future work to look for evidence that might distinguish between these possible drivers of extinction. The observed increases in biological productivity may have contributed to cooling and extinction by altering important shallow marine habitats.

While volcanoes emit carbon dioxide into the atmosphere, the story of past carbon cycling pieced together by Clementz and Carrapa suggests that under some conditions, volcanism could actually induce net decreases in atmospheric carbon. 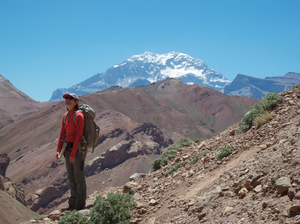 Barbara Carrapa in the Andes 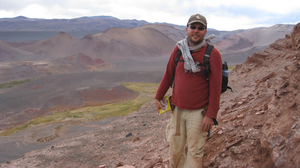 Mark Clementz in the Andes