A leading forensic scientist from Staffordshire University is setting sail in the Hawaiian Islands to investigate microplastic pollution in the ocean.

Claire Gwinnett, Professor in Forensic and Environmental Science, has been invited on a voyage of scientific discovery in partnership with the National Geographic Society (NGS) and Ocean Exploration Trust (OET) which have joined together to support three expeditions on OET’s research ship Exploration Vessel Nautilus.

The National Geographic Society has identified five teams of Explorers and their collaborators, including scientists like Professor Gwinnett, educators, and storytellers, who will join these expeditions. Various research projects focus on the exploration of Hawaiian ecosystems using scuba diving, snorkelling, and small-boat surveys to conduct research projects using both cutting-edge technologies and citizen science techniques.

Expeditions will focus on understanding different aspects of Hawaii’s unique ecosystems including projects investigating the impact of microplastic pollution, marine mammal communication and soundscapes, resident shark populations, and maritime heritage, as well as an Indigenous data sovereignty project, focused on connecting scientific teams to sources of Native Hawaiian knowledge in ways that mutually benefit both the team and Indigenous peoples.

The expedition to be joined by Professor Gwinnett runs from Oct 10 – Oct 24, and is led by OET President and Founder, and National Geographic Explorer-At-Large, Dr Robert Ballard who discovered the shipwreck of the Titanic.

Gwinnett’s expertise is in the analysis and interpretation of trace particulates, both for the purposes of investigating crime and understanding environmental pollutants. She is acknowledged as one of the world’s leading forensic fibre researchers and was the first to apply forensic science approaches to microplastic research.

“Our data will examine links between surface microplastics and sunken macroplastics, with the goal of determining an accessible and inexpensive method for identifying marine debris hot spots – and ultimately preventing and remediating plastic pollution.”

They will conduct a robust microplastic sampling program and create a map of microplastic and anthropogenic microfibre pollution found in the surface waters and air surrounding Maui and the island of Lāna‘i. National Geographic is funding these Explorer-led research projects to improve our understanding of Hawaii's unique ecosystems, inform conservation efforts, and inspire the next generation of explorers and planetary stewards.

The team will collect three types of microplastic samples: particles on the ocean’s surface, particles suspended in air, and particles falling from the sky. Samples will be fixed to slides using Staffordshire University’s patented Easylift® tape and analysed under a stereomicroscope and polarizing light microscope that allows for the examination and numeration of microplastics and anthropogenic microfibres.

Exploration Vessel Nautilus is the world’s only E/V designated Exploration Vessel. The ship uses telepresence technology to share live streaming video and data in real time with a worldwide community of interested explorers, researchers, learners, and communities on www.NautilusLive.org. Classrooms and other learning venues can directly connect with the science team by scheduling free ship-to-shore broadcasts.

On Tuesday 11 October Professor Gwinnett and Dr Rachael Zoe Miller will host a public live Q&A from onboard Nautilus which can be watched around the world. The “CSI For the Ocean'' panel will explain the dangers of plastic pollution to marine environments and how citizen scientists can be involved in mapping and monitoring microplastic pollution. This interactive session, fun for all ages, will include a Q&A allowing viewers to have their questions answered in real time. Watch the broadcast live on YouTube and Facebook at 7 pm BST (2 pm ET) or catch up with a recording which will be available to watch on-demand on the expedition webpage on NautilusLive.org.

On Wednesday 12 October the microplastics team will host a special student-focused      Explorer Classroom interactive session on YouTube at 7 pm BST (2 pm ET), primarily aimed at school pupils aged 9-14, including live Q&A with global audiences. Watch the broadcast live on YouTube  or catch up with a recording which will be available to watch on-demand on the expedition webpage on NautilusLive.org.

Professor Gwinnett said: “Plastic pollution is a global problem. We need to understand how much is in different locations, where it has come from, and where it is going. To help do this, we want to enable citizen scientists around the world to engage in microplastic research in a robust way.

“These events will provide anyone interested in conservation with an insight into our research and explain how to sample microplastics using the same methods that we are using on the expedition. I hope viewers at home in the UK and across the world will get involved!” 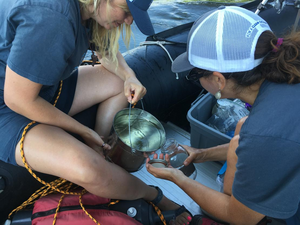