CHAMPAIGN, Ill. — In 1868, the naturalist Charles Darwin wrote that differences in plumage coloration between male and female birds of the same species were likely the result of sexual selection: Female birds – he used the peahen and peacock as an example – seemed to prefer the showiest males. A new study of thrushes offers evidence that another dynamic is at play, and helps explain why this phenomenon, called sexual dichromatism, is not universal among birds, its authors say.

They report their findings in the Journal of Evolutionary Biology.

“There are a number of ideas about why there can be differences in the ornamentation and appearance of plumage between male and female birds,” said Alec Luro, who led the research with ornithologist Mark Hauber, a University of Illinois Urbana-Champaign professor of evolution, ecology and behavior. Luro, now a research data analyst at Maine Medical Center, was a doctoral student in Hauber’s laboratory when they conducted the study. “A key question is why males and females look different in some species and similar in others,” Luro said.

The researchers hypothesized that plumage differences between males and females allow the birds to identify potential mates more quickly and avoid breeding with similar species. While some thrushes can hybridize with other species, such unions are not ideal, Hauber said. Hybrid offspring may be sterile or produce fewer offspring of their own.

The team tested its hypothesis by looking at the coloration patterns, migratory habits, breeding season lengths and breeding range overlaps of true thrushes, a widespread group of birds in the genus Turdus that includes American robins, song thrushes and European blackbirds. With published data on the visual system of European blackbirds, Luro used his statistical modeling expertise to determine which visual cues can be detected by a thrush when it views a bird of the opposite sex of the same species.

“It’s hard for us to imagine what the birds look like to each other because they have a different visual system,” Hauber said. “They have four color receptors instead of three, as humans do. And so differences that are subtle or invisible to humans could look dramatically different to the birds.”

Luro examined Turdus specimens from around the world preserved in the collections of the American Museum of Natural History in New York City and the Field Museum in Chicago. He selected adult specimens collected during the birds’ breeding season, as coloration can change throughout the year during periods of plumage molt. Using reflectance spectrometry and a model of avian vision, a technique that prior research determined is a reliable measure of what the birds perceive, Luro collected data from several patches across the body – for example, from the face, neck, belly and crown – and looked for subtle or pronounced contrasts in feather coloration between the males and females of 77 thrush species.

Visual modeling allowed Luro to calculate avian-perceived differences between the plumage patches on male and female birds. He looked at those differences in the context of the birds’ life history, including the length of their breeding season, their migratory behavior and the overlap of their breeding range with other Turdus species.

The researchers found that thrushes with the most pronounced color differences between males and females were more likely to be migratory, have short breeding seasons and share territory with a greater number of closely related species. This strongly suggests that sexual dichromatism allows migratory birds to quickly recognize mates of the same species when time is short and other closely related species are sharing their territory, Hauber said.

Previous studies failed to consistently consider that differences in coloration between males and females were important to birds’ ability to recognize their own species, Hauber said.

“We are now in good shape to finally suggest that sex differences are also involved in species recognition,” he said.

The Harley Jones Van Cleave Professorship at the U. of I. supported this research.

The paper “Pressure for rapid and accurate mate recognition promotes avian-perceived plumage sexual dichromatism in true thrushes (genus: Turdus)” is available online and from the U. of I. News Bureau.

Journal
Journal of Evolutionary Biology
Funder
Harley Jones Van Cleave Professorship at the U. of I.
DOI
10.1111/jeb.14089 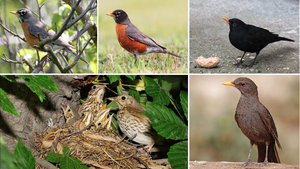