Wearable medical devices are an important part of the future of medicine and a key focus of researchers around the world. They open the door for long-term continuous monitoring of patients outside of the medical setting to give clinicians an accurate picture of what's happening and a better chance to effectively treat their ailments.

Researchers at The University of Texas at Austin have developed an electroencefalography (EEG) electrode that patients wear on their head to monitor brain activity. The EEG electrodes system could act as a brain-computer interface (BCI), which can be controlled by brain signals to help repair damage to the brain caused by strokes and other disorders.

This  electrode, shown in a new paper published in the journal Biosensors and Bioelectronics, can be worn comfortably and stable for up to four weeks, without the potential need for any medical personnel to intervene to maintain it. This is a big improvement on what's available today, as these types of electrodes typically need to be replaced every few hours or days at best.

"We're hopeful people can wear this at home for long periods and do their rehabilitation there instead of having to come into the clinic or rehabilitation center every day for weeks, which is even more challenging when you are recovering from a stroke," said Huiliang (Evan) Wang, an assistant professor in the Cockrell School of Engineering’s Department of Biomedical Engineering and one of the leaders of the project.

EEG electrodes today come in two main types, dry and wet, neither of which work well for consistent long-term monitoring. Wet electrodes, which are gel-based, do a better job of recording brain activity but require a lot more maintenance than dry electrodes.

The researchers' new electrode has the benefits of a wet, gel-based electrode, and eliminates major drawbacks, such as their tendency to dry out and then fall off. The project builds on a promising solution in early research phases that involves using conductive polymers as the basis for the electrodes.

The researchers took this idea to the next level by using conductive polymers together with polymers with high water content. That allows them to take advantage of the benefits of gel-based materials, primarily that they can give accurate recordings despite interference caused by the skin and hair, a concept known as electrode-skin impedance.

Wang and his team joined up with faculty from the Chandra Family Department of Electrical and Computer Engineering: professor José del R. Millán and assistant professor Yaoyao Jia, both experts in BCI. Together, they developed and characterized the new EEG electrode-based BCI system.

The electrode system records brain activities, such as the brain telling the hand to move. However, a stroke destroys the neural pathways between parts of the body, making it harder to send the signal for action. The combined brain-computer interface and functional electrical stimulation could translate thoughts about moving a body part into actions that stimulate the targeted area to carry out the brain's command. This approach could help to rebuild communication pathways between the brain and the rest of the body that was damaged by a stroke.

“These new EEG electrodes have the potential to revolutionize the field of non-invasive BCI, which currently requires substantial expert support to set up the system every session,” del Millán said. “Further, since mastering a BCI –and inducing functional recovery as well as brain plasticity– requires subject training, having a permanent system that people can utilize all day long autonomously will boost the potential of this technology.”

The next step for the researchers is expanding how long the electrode can be worn and the kinds of activities this wearable EEG-based brain-computer interface can facilitate. They're also looking at applications such as controlling a wheelchair, moving prosthetic limbs and more. 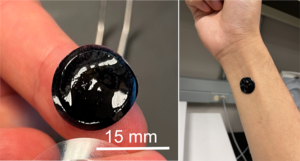