The main points of this study are as follows.
・    KRAS mutations occur in approximately 40% of all human colorectal cancers and approximately 90% of all pancreatic cancers. Although KRAS inhibitors have been developed worldwide, this has been greatly hampered by the lack of protein structural pockets for drug binding. In recent years, compounds that can selectively inhibit KRAS with a specific mutation have been used as drugs to treat lung cancer. However, even such targeted KRAS inhibitors are only temporarily effective due to the high rate of the development of drug resistance.
・    KRAS signaling feeds into a broad cell proliferation signaling network. Targeting just KRAS, therefore, does not fully inhibit this signaling network. Targeting multiple key genes involved in this network by microRNAs is, therefore, a more effective strategy.
・    The chemically modified microRNA143 that we developed is not readily degraded, remaining stable in mouse blood, and it suppresses the expression of several key genes in the KRAS signaling network, thereby disabling the KRAS signaling network and inducing cell death at extremely low doses in cancer cells (IC50: ranging from 0.11 – 11.17 nM against colon cancer cell lines tested). The anticancer effect of this microRNA was more potent than suppression of the expression of the individual genes.
・    In a mouse model, the KRAS signaling network was inhibited and tumor growth was significantly reduced. New blood vessels were formed in the tumors, indicating that the effect of the chemically modified microRNA143 may have been enhanced.

KRAS mutations are frequently observed in various types of cancers. However, the development of effective KRAS-targeting anticancer drugs has been greatly hampered because the KRAS protein structure lacks adequate drug-binding pockets and because alternative signaling pathways can lead to activation of the broader KRAS signaling network. Aberrant activation of the PI3K/AKT and MAPK/ERK KRAS-effector pathways occurs often in many types of cancers, and many therapeutic agents targeting components of these pathways have been developed. Targeting these pathways is an important strategy for treating KRAS-mutant cancers. Numerous inhibitors targeting these pathways have been clinically evaluated. For instance, for the MAPK pathway, inhibitors of RAF, MEK, and ERK have been tested clinically, as have inhibitors of the PI3K/AKT pathway. However, suppressing KRAS-driven cancers remains a challenge. Global suppression of these signaling pathways is crucial for achieving a durable effect on cancers because inhibition of only a single component or pathway in the signaling network generally results in resistance to the agent as a result of activation of pararell signaling pathways. Therefore, there is a pressing need for an effective strategy to broadly target KRAS-driven cancers. In light of the cellular localization of KRAS, there is little scope for the development of antibody-based medicines. However, an approach that appears to be quite promising is downregulation of KRAS expression using small interfering RNAs (siRNAs) or microRNAs.

MiR-143#12 systemically inhibited the KRAS signaling network, which includes the KRAS-MAPK and PI3K-AKT effector signaling pathways, by silencing KRAS, SOS1, AKT, and ERK both in vitro and in vivo in colon cancer cells (1). In the same study, we demonstrated a synergistic effect of an EGFR inhibitor and miR-143#12 in KRAS-mutant cells. In addition to colorectal cancer, miR-143#12 exhibited tumor suppressor activity in various types of cancers. We found that miR-143#12 efficiently suppressed the KRAS signaling network in KRAS-mutant bladder cancer (2), gastric cancer (3), renal cancer (4), and rhabdomyosarcoma cells (5) by systematically suppressing not only KRAS but also the PI3K/AKT and MAPK/ERK pathways of the signaling network. MiR-143#12 has revealed an elaborate miR-143/KRAS cascade, which has not been previously demonstrated in KRAS-mutant colorectal cancer cells (Figure 2).

Local administration of miR-143#12 to nude mice implanted subcutaneously with human colon cancer cells resulted in marked inhibition of tumor growth, even at low doses. Analysis of protein expression in treated mouse tumor samples revealed reduced expression of KRAS network components (KRAS, AKT, ERK, and SOS1). The antitumor effects of miR-143#12 have also been demonstrated in animal studies. In addition, as a new finding, staining of tumor samples with the CD31 marker of blood vessels showed significant staining at the sites where miR-143#12 had penetrated. This suggests that miR-143#12 may induce normal angiogenesis, thereby enhancing its effects (Figure 3).

Although KRAS is a key driver of oncogenesis, it has become clear that inhibition of KRAS, AKT, and ERK alone is not sufficient to cure cancers with KRAS mutations. However, inhibition of the broader KRAS signaling network by our chemically modified miR-143#12 is highly effective. Furthermore, angiogenesis was observed in a mouse cancer model, and this was accompanied by antitumor effects, even at low concentrations. Future development of a drug delivery system that allows exploitation of the effects of systemic administration of miR-143 #12 is desirable.

(2) Anti-cancer Effects of a Chemically Modified miR-143 on Bladder Cancer by Either Systemic or Intravesical Treatment.

(4) Synthetic miR-143 Exhibited an Anti-Cancer Effect via the Downregulation of K-RAS Networks of Renal Cell Cancer Cells In Vitro and In Vivo.

Development of a potential microRNA medicine against KRAS mutant cancers 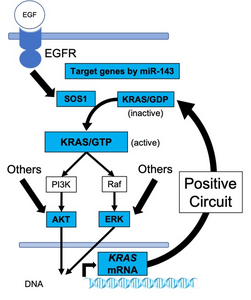