Visual signals, such as color patterns are an important communication medium for anemonefish. Researchers from Okinawa Institute of Science and Technology have recently elucidated how the patterns on anemonefish—which are conspicuous white bars against an orange, red, or black background—influence their aggressive behavior and possibly determine the color patterns of cohabitating fish. The behavioral responses and social interactions ultimately govern community structure within the surrounding coral reef ecosystem.

Color patterns on fish are visually appealing, but their function goes much beyond providing aesthetic appeal to their beholders! These patterns are governed by multiple factors such as predators, prey, competition, and the choice of mate.

In highly transparent water around coral reefs, visual signals such as color patterns are used as important communication tools. Many fish leverage these patterns to monitor their interactions with fish of their own species or different species, including mimicry, identification, camouflage, and courtship. In fact, fish inhabiting coral reefs produce a broad range of color patterns—bars, stripes, and spots—and have the most diverse pigment cell types among all vertebrates.

One such species—the anemonefish, inhabits sea anemones right after exiting the larval stage, and is characterized by white bars on an orange, red, or black background. However, the exact evolutionary function of these bars in anemonefish has not been understood clearly.

Now, marine biologists including Dr. Kina Hayashi and Dr. Vincent Laudet from the Marine Eco-Eco-Devo Unit at Okinawa Institute of Science and Technology (OIST), and Dr. Katsunori Tachihara and Dr. James Davis Reimer from The University of Ryukyus have explored how color patterns are associated with frequency of aggressive behavior displayed by anemonefish in coral reefs. The findings from this study, which was led by Dr. Hayashi, were published in Proceedings of the Royal Society B on October 5, 2022. "Our findings are the first to highlight that banding patterns of fish in the vicinity of an occupied anemone influence the behavior of other resident fish.", says Dr. Hayashi.

For the study, the team conducted field surveys at 5 different sites on the Ryukyus Archipelago, between September 2020 and October 2021. They targeted the Amphiprion ocellaris species of anemonefish, which inhabits the Stichodactyla gigantea species of anemone, in each study area. Furthermore, they studied the fauna residing in 49 S. gigantea individuals and 49 scleractinian corals closest to these anemones. "Although anemonefish aggressively defend their host anemone, a host anemone can still be a temporary home for other fish seeking refuge.", says Dr. Hayashi while discussing the study.

The team had previously observed that other fish residing in these anemone hosts had stripes or spots, but none had vertical bar patterns. "We hypothesized that the anemonefish were playing gatekeeper. It was possible they were excluding fish based on color patterns.", adds Dr. Hayashi.

To confirm this hypothesis, the team conducted a behavioral experiment to document aggressive behavior of anemonefish by dangling plastic fish toys close to an anemonefish colony. They painted these toys either with vertical white bars, or with horizontal white stripes to present them to the anemonefish. Instances of “chasing” or “biting” them were recorded as aggressive behavior.

The findings indicated that no fish with vertical bars sought shelter in host anemones. However, a variety of species bearing this color pattern were found in the surrounding corals. Specifically, only 39% of the anemones were used as shelter by fish other than anemonefish, while 100% of the corals were used as shelter by fish of other species. True to character, the anemonefish responded aggressively when presented with the fish toys containing vertical bars. In fact, the duration of this aggressive behavior was also much longer towards the vertical bar model than towards the horizontal stripe model.

“It is likely that the fish community around host anemones is affected by the differences in the frequency of aggressive behavior of anemonefish towards intruders with certain color patterns,," says Dr. Hayashi regarding these findings.

What are the future implications of these findings? Dr. Hayashi exclaims, “Elucidating the relationship between color pattern recognition ability and aggression displayed by anemonefish will provide useful insights on the mechanisms of coexistence employed by coral reef fish, and the roles that their patterns play. In regions with coral reefs, conserving species and their habitats is crucial, which is possible if we understand the interactions between these inhabitant species.”

The researchers aren’t sure yet how color patterns are recognized and what basic rules control the inter- and intra-specific signaling. However, they firmly believe that future investigations on how the rules of color patterns influence fish behavior can enable us to protect biodiversity near coral reefs from climate change.

Journal
Proceedings of the Royal Society B Biological Sciences
Funder
Japan Society for the Promotion of Science
DOI
10.1098/rspb.2022.1576 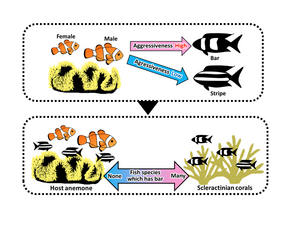