Denver, Colo., USA: Britain’s transition from water power to coal-based steam power set the stage for the 19th century Industrial Revolution, which transformed much of Europe and North America into predominantly urban and industrialized societies. One long-held argument for this move “away from the water” has been that Britain no longer had sufficient water resources to satisfy the increasing power demands of its textile mills.

Now new research to be presented Tuesday at the annual meeting of The Geological Society of America indicates that the potential stream power of only a few English river basins had been fully tapped by the mid-19th century. Instead, historical precipitation records suggest that low stream flows caused by periodic drought may have played a much more important role in the country’s shift toward steam power.

“The causes and consequences of the Industrial Revolution have remained a hot topic of scholarly debate since the term was popularized in the 1880s,” says Tara Jonell, a postdoctoral researcher at the University of Glasgow’s School of Geographical and Earth Sciences. “Most of the literature has focused on the role of steam power driving the Industrial Revolution, but our team has found further evidence supporting previous scholarship arguing that water provided most of the power during the revolution’s first four to six decades.”

The team, which includes principal investigators Adam Lucas and the late Paul Bishop, also found indications that Scotland continued using water power longer than England did. This is significant, says Jonell, because the prevailing narrative has been that the British textile industry largely abandoned water power either because steam power became cheaper, or because existing water resources had been exhausted. “We have found that neither of these claims is credible,” Jonell says.

Bishop and Lucas initiated this project after determining that almost no attention had been paid to the roles that climate and physical geography played in Britain’s transition to steam power. Only one previous study from 1983 had attempted to evaluate this historic change based on real-world observations and cost analysis. But those results relied on modern rainfall records and were only generated at the scale of individual river basins, so Bishop and Lucas sought to revisit historical water power.

To generate national-scale historical power potential maps, the researchers adjusted topographic datasets with “true-to-life” stream geometries and combined these with precipitation and evaporation grid datasets calibrated by historical rain-gauge measurements. Because the researchers’ period of focus is from 1770–1890, they also assembled a database to correct for modern infrastructure, including thousands of dams, weirs, crossing bridges, and aqueducts. These create artificially steep and powerful regions of the river that would lead to errors that would skew the data and therefore must be corrected for, according to Jonell. The team then compared the potential power of English and Scottish river basins with their reported demands to estimate the degree to which each basin’s water resources were utilized during that 120-year period.

The results indicate that by about 1838, many English and Scottish basins remained underutilized, and that water demand far exceeded water availability only in the most crowded industrial water corridors. The team also found that under average hydrological conditions, Scotland provided more power potential than northern England. “Our findings to date demonstrate a much more nuanced regionality to power availability and utilization across Great Britain than traditional Industrial Revolution narratives suggest,” says Jonell.

Drought as a driver

Because the only prior study to look at water-power potential used modern (post-1960s) precipitation, the researchers also collated historical moisture grid datasets and re-calculated the results to see how the older data would affect their estimates for power. They found that northern England and Scotland may have experienced periods of low river flow, suggesting that episodic drought may have been an important yet underestimated natural driver in the dynamic evolution “away from the water.”

“We know from archival evidence, including testimony to a variety of parliamentary inquiries in the early 1800s, that seasonal fluctuations in rainfall created real problems for manufacturers who used waterpower,” says Peter Jones, a University of Glasgow postdoctoral researcher working on the social and environmental history of the project. “Lack of water in summer and floods in fall or winter meant that many mills experienced significant periods of reduced work, and in the worst years they could effectively close mills for days, or even weeks, at a time.”

This, explains Jones, was nothing new: It was something that corn (grain) millers had faced since at least the Middle Ages. But as water power was applied to increasingly larger manufacturing operations from the 1770s onward, the problem became acute enough that it could threaten a business’s viability. “It is only a short step to recognizing that in some locations, elevated or extended periods of drought could threaten entire sectors of water-powered industry,” Jones says.

By mapping out when, how, and why the transition from water to steam power occurred in different regions for different textiles, the researchers hope to demonstrate that renewable forms of energy were far more important to the Industrial Revolution than has hitherto been acknowledged, and that Scotland was neck-and-neck with England in terms of technology and production into the 19th century. “Both findings will hopefully provide correctives to the common perceptions that England was the first, only, and foremost powerhouse of the Industrial Revolution, and that reliance on renewable forms of energy in the early modern period was an obstacle to—rather than an enabler of—technological development and economic growth,” conclude Lucas and Jonell.

The Geological Society of America ( https://www.geosociety.org) unites a diverse community of geoscientists in a common purpose to study the mysteries of our planet (and beyond) and share scientific findings. Members and friends around the world, from academia, government, and industry, participate in GSA meetings, publications, and programs at all career levels, to foster professional excellence. GSA values and supports inclusion through cooperative research, public dialogue on earth issues, science education, and the application of geoscience in the service of humankind.

Drought, not lack of ‘working rivers’, may have helped spur transition to steam power in Britain’s industrial revolution 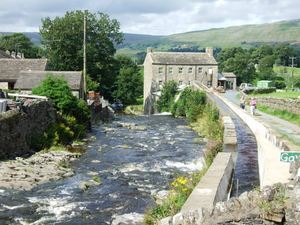