Using an in vivo model that mimics the genetic alteration of Williams-Beuren syndrome, researchers from the UPF’s Neuropharmacology Laboratory – NeuroPhar, in collaboration with several other universities, found alterations in the function of the endocannabinoid system that, by modulating it, could considerably improve some of the characteristic symptoms of the syndrome. The study is of great interest to researchers and physicians in the field of human genetic diseases and it has been published today in eLife.

Williams-Beuren syndrome is a rare disease that occurs in about one in every 7,500 births. It is characterized by a deletion in one of the two pairs of chromosome 7 from a region containing 26-28 genes. As there is only one copy of these genes, they are expressed at levels below their typical expression. The most common alterations are characteristic facial features, hypersociable behaviour with uninhibited interpersonal interactions, cognitive deficit (from mild to moderate), limiting cardiac alterations, high levels of calcium in the blood (hypercalcemia), difficulty in recreating a three-dimensional representation of their surroundings which causes them to have problems of motor coordination, and they usually have a good musical disposition. To date, there is no curative therapy for this syndrome, but there are specific treatments for some of the symptoms.

The endocannabinoid system is a little known neurotransmission system and is of special interest because it can be altered by exogenous ligands, in addition to those of the system. One such exogenous ligand is cannabis, which binds to cannabinoid-specific receptor proteins. Since this system can be pharmacologically modulated and plays a relevant role in functions such as learning, memory and sociability, as well as regulating many other physiological functions, the research team thought that this system could play an important role in modulating some of the symptoms.

They used a mouse model that mimics Williams-Beuren syndrome at the genetic level and presents phenotypes representative of the condition such as hypersociability, cognitive deficit, heart hypertrophy and arterial hypertension. They first studied the alterations in the endocannabinoid system at the level of the brain, observing that there were alterations in the expression and functionality of one of the main receptors of the endocannabinoid system, the CB1 receptor.

“To modulate the system”, explain Lorena Galera-Lopez, a postdoctoral researcher at NeuroPhar and Alba Navarro-Romero, the main authors of the study “we use a treatment with the experimental drug JZL184 that is responsible for inhibiting an enzyme that degrades endocannabinoids by increasing the endogenous levels of these endocannabinoids. This drug has previously been used to study the effects of increasing internal levels of endocannabinoids in the body and it has been observed that it may have anti-inflammatory effects in the brain, but its effects on this genetic condition were unknown”.

The goal was to see if modulating the endocannabinoid system could reverse the alterations present in the mouse. The results showed that administering the drug over a 10-day period normalized some of the changes in activity in the CB1 receptor while improvements were seen in hypersociability phenotypes, memory problems, heart hypertrophy, and hypertension.

Andrés Ozaita, a senior researcher at NeuroPhar and co-author of the research, explains that “drug treatment works according to the context. In general, no relevant changes were observed in the control mouse, while in the Williams-Beuren model notable changes were detected, indicating that the drug specifically modulates this condition. For example, in the heart, the change brought about by the treatment in the model was substantial with regard to gene expression: about 70 percent of the genes that were altered in the genetic condition returned to typical expression levels, which is a rather surprising result”.

The next step in the research will be to test in the animal model molecules with the ability to modulate the endocannabinoid system that already have a clinical application. “We are interested in testing other types of molecules that may be closer to clinical use and have a similar effect on the endocannabinoid system to the molecule we have used”, explains Andrés Ozaita, “to see other therapeutic possibilities to find out to what extent we can reproduce the positive effects we have described”.

The mouse model used, which is the one that best mimics the genetic alteration that occurs in humans, was developed by the researcher Victoria Campuzano, director of the “Genetic diseases of the connective tissue” group of the University of Barcelona, who also participated in the study.

Lorena Galera-López and Alba Navarro-Romero worked with the animals carrying out the treatments and behavioural tests, as well as performing the anatomical and molecular measurements in the brain and heart. 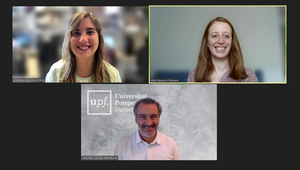