In topological insulators, global geometric phases of energy bands determine the existence of unidirectionally propagating edge states, which are immune to local defects, bringing a new stage for designing noise-resilient devices of electrons, photons and atoms. The geometric phase is measured by adiabatically transporting a quantum state through a Brillouin zone, which requires sophisticated quantum control technique. In atoms, such measurement can only be carried out at an extremely low temperature.

In a new paper published in Light: Science & Application, a team of scientists led by Da-Wei Wang and Han Cai from Zhejiang University developed a new technique to measure geometric phases in thermal atoms. The work is implemented in superradiance lattices, i.e., momentum-space lattices of collectively excited states of atoms, the so-called timed Dicke states. The authors summarize the essence of their technique as follows.

“In particular, we find that the velocity of atoms is proportional to the strengths of the effective electric field. In thermal atoms, we obtain the energy spectra of superradiance lattices by integrating Wannier-Stark spectra of atoms with different velocities. When two ladders from different energy bands have the same energy for a certain velocity, an anti-crossing happens, which is characterized by a dip in the energy spectra.”

“By measuring the energies of those dips, we manage to reconstruct the geometric phases of the energy bands. The technique is applied to various one-dimensional lattices, including the Semenoff insulators, the Su-Schriefer-Heeger models, and the generalized Rice-Mele model.”

“Our experiment demonstrates a conceptually novel technique in detecting band geometry of laser-dressed atoms and can be generalized to measure other topological invariants in higher-dimensional systems. Meanwhile, it also paves a way for the application of topological physics in optical devices at ambient temperature.” The scientists forecast. 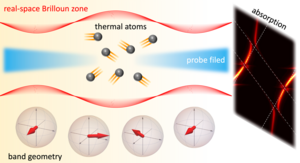