ALBUQUERQUE, N.M. — The nation’s largest national laboratory is embarking on a major expansion of its network of academic partners to meet the surging demand for national security science and engineering.

But Sandia won’t meet its obligations just by hiring staff.

“Partnering with universities keeps Sandia science at the state of the art and enables us to do more research for our national security mission than we can on our sites alone,” said Diane Peebles, Sandia’s senior manager of academic programs.

Additionally, “A memorandum of understanding aligns the leadership at each institution to invest and deeply engage to help each other in numerous ways beyond just collaborative research,” said Ken Patel, Sandia’s campus partnership manager for Purdue University and UC Berkeley. “The MOU is more strategic and thinks long term rather than project specific. It helps to meld the institutional synergies and leverage the unique differences, so that we can become more effective partners.”

Patel said the agreements also streamline other activities — such as when Sandia staff teach university courses or when the laboratory arranges workspace for a visiting faculty — and simplify financial agreements.

The new memoranda expand existing relationships Sandia uses to carry out its national security programs, ranging from research to recruiting and workforce development.

A longstanding collaboration with UC Berkeley professor Jennifer Doudna, who shared the 2020 Nobel Prize in chemistry for her work on CRISPR-Cas9, a way to edit DNA, has helped Sandia and the Department of Energy design safeguards for genetically engineered organisms. The project helps ensure the organisms do not cause unintended, negative environmental and social impacts. Sandia also works with UC Berkeley on nuclear deterrence, global security and quantum information science projects.

Texas A&M and Sandia have had research relationships in hypersonics, global security research, materials science and, more recently, infrastructure cybersecurity. The relationship is further strengthened by Texas A&M-RELLIS, the technology and testing research hub of the Texas A&M University System that facilitates collaboration and educational opportunities in areas such as autonomous and connected vehicles, robotics, roadside safety and physical security, large-scale infrastructure, smart power grids and water systems, and the internet of things.

“For nearly 15 years, Texas A&M University and Sandia have worked together to advance national security research,” said Texas A&M President M. Katherine Banks. “Becoming an alliance partner formalizes our working relationship and commitment to strengthening the safety of our country.”

The University of Texas at El Paso and Sandia work together to develop a sustainable and high-caliber STEM workforce from underrepresented groups by providing an innovative research and educational platform at the intersection of legacy power system analysis, nuclear engineering and cyber-physical systems. The two institutions are partners in the Consortium for Research and Education in Power and Energy Systems for Sustainable STEM Workforce, which is supported by the National Nuclear Security Administration’s Minority Serving Institution Partnership Program.

Sandia has a decades-long recruiting relationship with North Carolina State University, where many alumni have gone on to work as Sandia staff on projects such as the U.S. Navy’s Conventional Prompt Strike hypersonics program. Both institutions have been involved in collaborative research efforts, including NNSA nonproliferation programs and the Department of Energy’s Consortium for the Advanced Simulation of Light Water Reactor. The memorandum of understanding will allow for more opportunities for both institutions to impact Sandia’s national security and energy initiatives.

Collaborations with Arizona State University have enhanced Sandia’s capability in building microelectronic systems that improve the performance, reliability and functionality of national security platforms. Former Sandia staff member Matthew Marinella collaborated extensively with the university in these areas. He recently joined ASU as an associate professor and has continued to foster a research relationship that is producing radiation-hardened microelectronics and neuromorphic computing technologies. Sandia also is working with Sarma Vrudhula, ASU professor and director of the National Science Foundation’s Center for Embedded Systems, to discuss the feasibility of establishing a new multi-institutional research coalition.

In 2021, Sandia teamed up with the University of Washington and other research institutions to form Perovskite PV Accelerator for Commercializing Technologies to standardize tests and documentation for rapidly evolving solar cell technologies. The university is also home to the Institute for Nuclear Theory, which the DOE established in 1990 to facilitate interdisciplinary research, workshops and training in subatomic physics.

The expansion of partners also means that more college students than ever before will have opportunities to participate in national security projects with Sandia starting this fall. A formal relationship with a university enables Sandia to create student jobs through Laboratory Directed Research and Development funding provided to schools that can be used to pay for research stipends.

“When we get students involved in that LDRD research, then those students get to see what Sandia projects look like, they get to work directly with Sandia principal investigators and they get a poster session at the end of each fiscal year to present their work,” Peebles said.

Networking and recruiting events, also sponsored by Sandia and facilitated through the new agreements, help students find well-paying jobs after they graduate.

“It’s a chance to make a serious impact in national security in a way that they probably wouldn’t have at other institutions,” Peebles said. 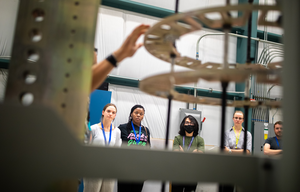