Communities along the coast often have their individual, onsite wastewater treatment systems, also called septic systems. In North Carolina alone, there are about one million homes with septic systems that are either on a coastline or are located in watersheds that drain into the ocean.

To operate effectively, coastal septic systems rely on unsaturated soils to filter wastewater and direct flow away from homes. But in some communities, the shallow groundwater table is rising, leaving homeowners in a precarious position.

“Typically, when you permit the septic systems in North Carolina, they want to have about one and a half feet of unsaturated soils below the system,” explains Michael O’Driscoll , associate professor at East Carolina University. O’Driscoll is a coauthor of a new study being presented at the Geological Society of America’s annual meeting tomorrow.

However, as groundwater levels rise in some of these areas, septic systems are no longer functioning as they were designed.

“You can have a mixture of groundwater and untreated waste getting up to the surface,” says O’Driscoll. While unpleasant, it can also be a health hazard, as the normal filtration of bacteria and viruses doesn’t happen. Adding to the problem, this water can back up into homes, causing a real issue for residents. Some residents have waited days to weeks for the water to recede before being able to use their septic system.

As part of the larger North Carolina Sea Grant research effort , O’Driscoll and colleagues focused on understanding rising groundwater levels in coastal areas. “We wanted to get an idea of where the more risky areas are, to help understand and try to come up with some solutions for how to adapt to this change,” he says.

The team focused on the town of Nags Head, a popular tourist destination in Dare County, North Carolina. “When you look at sea level rise along the Atlantic coast, that part of Northeastern North Carolina and Southern Virginia around the Chesapeake Bay, have some of the highest rates of sea level rise,” says O’Driscoll. “Some of the town officials noticed that they're having more challenges with groundwater-related flooding and stormwater issues.”

The region has a long record of groundwater level data from eight NC Department of Environmental Quality aquifer wells, reaching back to 1983. Along with these state-operated wells, the researchers installed instruments on five additional wells to look at how groundwater fluctuations affected septic systems.

They found that groundwater levels are rising with the sea level rise. This change has shrunk the unsaturated soil thickness necessary for functional septic systems. By looking at land surface elevations of septic systems and groundwater levels, the team found that in the Nags Head area, homes that were less than about 2.6 meters above sea level were more likely to experience insufficient unsaturated soils, and would likely have trouble with on-site water treatment systems.

Considering state regulations require 45 cm of unsaturated soils for septic systems to work as designed, having groundwater levels withing a meter of the land surface means problems, says O’Driscoll. “The systems that are in the lower elevation areas, they're having problems right now,” he says. During their study, one home they were monitoring had groundwater in the drain field about 70% of the time. “That tells you there’s no treatment… and it can just get worse over time.”

To combat dysfunctional onsite wastewater systems, O’Driscoll says some builders are creating an artificial buffer. They put septic systems in mounded sand, effectively raising the drain field and adding unsaturated soils. In some communities, like Nags Head, officials have created their own septic health initiatives to identify problem areas and deal with failing systems that need to be replaced.

O’Driscoll notes that big municipal wastewater treatment facilities are cost prohibitive for some communities. He says that if there is an area where there's a hotspot of failing systems, an advanced treatment system called a package plant might be an option for a community. They’re more expensive than a septic system, but much less than building a municipal wastewater treatment center.

The Geological Society of America (GSA) (https://www.geosociety.org) unites a diverse community of geoscientists in a common purpose to study the mysteries of our planet (and beyond) and share scientific findings. Members and friends around the world, from academia, government, and industry, participate in GSA meetings, publications, and programs at all career levels, to foster professional excellence. GSA values and supports inclusion through cooperative research, public dialogue on earth issues, science education, and the application of geoscience in the service of humankind. 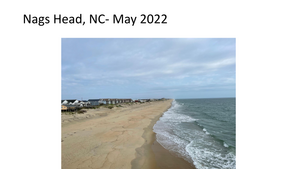 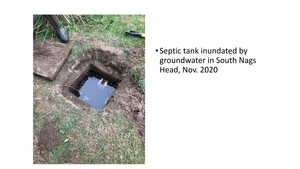