Why is ethylene referred to as the bread and butter of industries? This colorless gas serves as the feedstock for various petrochemical products such as plastics, vinyl, and synthetic rubber, in the same way that bread and butter are indispensable to the nation's food supply. The technology that permits electrochemical carbon dioxide reduction, which produces ethylene from CO2 instead of petroleum, has recently become a hot topic. Recently, a Korean research team has thoroughly analyzed the role of cations in converting CO2 into valuable chemical products.

The electrochemical reduction of carbon dioxide is a technology that produces valuable chemical products from the reaction of CO2 and water. The process has garnered attention as an eco-friendly method that does not emit carbon and utilizes renewable energy sources. Numerous efforts are underway to make this technology commercially viable, but uncertainly over the mechanism behind the reaction has been a stumbling block.

The POSTECH-KAIST researchers used a quantum-mechanics-based atom-scale simulation to scrutinize the mechanistic role of alkali metal cations (M+) to reactants at the catalyst-electrolyte interface. Their simulation displayed the cation-coordinating capability to any intermediate species, which was CO2 in this case, stimulated the reaction. They also confirmed figures from their concentration adjustments to prove that the higher the cation concentration yields higher ethylene production rate.

Based on these research findings, the research team additionally secured a catalyst-electrolyte interface control mechanism to increase the cation concentration in the electric double layer around the electrode, and succeeded in producing high-performance ethylene.

Professor Choi explained, “Our research revealed that M+ complexation to the CO2−intermediate is an essential mechanism for CO2 reduction to produce ethylene. This mechanism suggests a fresh approach to identifying high-performance catalytic conditions as well as a meaningful step toward carbon neutrality by supporting fuel cell and water electrolysis technologies.”

This research, recently published in Nature Communications, was supported by the Samsung Science and Technology Foundation and the Leading Research Center program of the National Research Foundation of Korea. 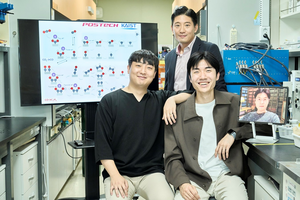