A Japan-based research team led by Professor Hiroki Obata has been continuing the work of identifying cultivated plants and household pests from Japan’s Jomon period (16,500 – 2,800 years ago) using their own technique of identifying the subtle traces of organisms in and on earthenware and clay pottery. So far, they have found vestiges of plants like soybeans, azuki beans and perilla, which are thought to have been brought indoors for storage, processing, and cooking. They also found many traces of insects in the pottery including food pests like the maize weevil and lesser grain borer and the leather & textile-damaging skin beetle. In 2016, the team published their discovery of cockroach egg casing impressions on the surface of Jomon pottery at the Motonobaru archaeological site in Miyazaki Prefecture.

Humans and cockroaches have cohabited since ancient times. Out of the approximately 50 known species of cockroaches in Japan, about ten regularly enter homes and buildings. The Yamato cockroach (Periplaneta japonica) is considered native to the country because its likeness appears in documents from the Heian period (793–1185). Most other species are thought to be non-native, mostly originating from Africa.

To make the identifications, the researchers used a scanning electronic microscope and other tools to measure the morphology of earthenware impressions of cockroach egg casings found at multiple archaeological sites around the country and compared them to the egg casings of present-day cockroaches. They were able to determine that casing impressions excavated from the sites in western Japan belonged to the smokybrown cockroach (Periplaneta fuliginosa) and those from sites in eastern Japan were from the Yamato cockroach. The smokybrown cockroach was previously thought to have originated in southern China and entered Japan during the Edo period (18th-19th century) through sea trade. However, its discovery at the Motonobaru site has led Professor Obata and colleagues to speculate that the smokybrown cockroach is, in fact, a species native to Japan that was thriving on the archipelago in the Jomon period.

The work also indicates that the current geographical distribution of major cockroach species in modern Japan was already established 5300-4000 years ago, with smokybrown cockroach in western Japan and the Yamato cockroach in eastern Japan. The research team believes this is an important discovery that takes aim at the conventional entomological theories on the history of Japanese domestic cockroaches were established.

“Cockroaches have received little attention in the past due to a lack of necessary archaeological data,” says Professor Obata. “This is partly because insects are easily decomposed as adults, making it difficult for them to become fossilized. This study, which focuses on cockroach egg casings, is extremely pioneering."

Professor Obata and his colleagues have been working on a research project entitled "Excavating Earthenware" through the Grant-in-Aid for Transformative Research Areas (A) fund from Japan’s Ministry of Education, Culture, Sports, Science and Technology (MEXT) since the fall of 2020. This work is one of the outcomes of this project. 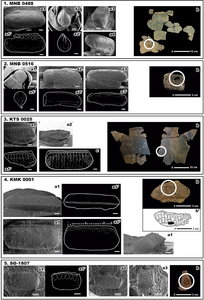