A new imaging technique captures the structure of the human genome at unprecedented resolution, revealing how individual genes fold at the nucleosome level – the fundamental units constituting the genome’s three-dimensional architecture.

Developed by Barcelona-based researchers at the Centre for Genomic Regulation (CRG) and the Institute for Research in Biomedicine (IRB Barcelona), the technique works by combining high-resolution microscopy and advanced computational modelling. It is the most comprehensive method created to date to study the shape of genes.

Researchers can use the new technology to create and virtually navigate three-dimensional models of genes, visualizing not only their structures but providing details on how they move or how flexible they are. Because almost every human disease has some basis in genes, understanding how they work could lead to a deeper understanding on how they affect the human body in both health and disease.

Eventually, scientists can use this information to predict what happens to genes when things go wrong, for example by cataloguing variations in the shape of genes that cause disease. The technology could also be used to test drugs that change the shape of an aberrant gene, helping discover new treatments for different types of disease.

The technology is the next evolution of imaging techniques used to study living organisms, which first started more than four hundred years ago with the creation of microscopes. These played a crucial role in advancing medicine and human health, for example used by Robert Hooke to describe cells for the first time and later used by Santiago Ramón y Cajal to identify neurons. Despite great advances, the limitations of optical microscopes were clear as far back as 1873, with researchers stipulating that their maximum resolution could not surpass 0.2 micrometres.

This physical limit was overcome in the 21st century with the creation of super-resolution microscopy, a breakthrough which was awarded the Nobel Prize in Chemistry in 2014. Using fluorescence, researchers extended the limits of light microscopy and captured events at 20 nanometres, a feat that revealed how life works at unprecedented molecular scale.

Super-resolution microscopy changed the course of biomedical research, enabling scientists to track proteins in a variety of diseases. It also enabled researchers to study molecular events that regulate gene expression. Scientists now want to build on the technology and take it one step further by adding more layers of information.

Researchers hypothesised that taking super-resolution microscopy and merging it with advanced computational tools could be a way of imaging genes at the level of detail necessary to study their shape and function. An interdisciplinary team of scientists shared their expertise and created a new technique called Modeling immuno-OligoSTORM – or MiOS for short.

The two research groups teamed up as part of the Barcelona Institute of Science and Technology’s (BIST) Ignite Call, which facilitates the exchange of knowledge among different scientific fields and exploring new approaches to address complex questions.

"Our computational modelling strategy integrates data from DNA sequencing techniques and super-resolution microscopy to provide an essential picture (or movie) of the 3D shape of genes at resolutions beyond the size of nucleosomes, reaching the scales needed to understand in detail the interaction between chromatin and other cell factors," says Dr. Juan Pablo Arcon, co-first author of the work and postdoctoral researcher at IRB Barcelona.

As proof of concept, the research team used MiOS to provide new insights on the position, shape and compaction of key housekeeping and pluripotency genes, revealing new structures and details that are not captured using conventional techniques alone. The findings are published in the journal Nature Structural & Molecular Biology. The study's corresponding authors include ICREA Research Professor Pia Cosma at the CRG and Professor Modesto Orozco at IRB Barcelona, as well as Pablo Dans, previously a researcher at IRB Barcelona and now at University of the Republic (Uruguay) and the Institut Pasteur of Montevideo.

“We show that MiOS provides unprecedented detail by helping researchers virtually navigate inside genes, revealing how they are organised at a completely new scale. It is like upgrading from the Hubble Space Telescope to the James Webb, but instead of seeing distant stars we’ll be exploring the farthest reaches inside a human nucleus,” says Dr. Vicky Neguembor, co-first and also co-corresponding author of the study and researcher at the CRG.

While a lot of genome-based research is already changing how we diagnose, treat or prevent diseases, the impact of MiOS is more long-term. By shedding light on how genes work and how they are regulated at the nanoscale, the technique will enable new discoveries in the scientific laboratory, some of which might eventually translate into clinical practice.

The research team is already putting MiOS to use by exploring genes that are important for human development. The team will also keep developing MiOS further, adding additional functionality that can for example detect how transcription factors – proteins involved in the process of converting, or transcribing, DNA into RNA – bind to DNA.

Researchers capture how genes fold and work at unprecedented resolution 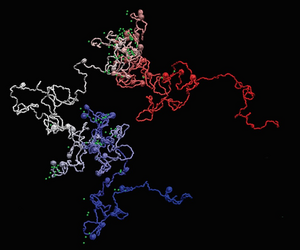 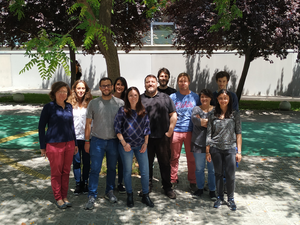 Picture of the MiOS team together