Los Angeles is known for its movie stars and beaches. It’s also known for being one of only two megacities in the world that supports a population of big cats. Despite being surrounded by a vast network of busy freeways and over ten million people, mountain lions have somehow managed to eke out a living in the wooded LA-area hills. Now, researchers reporting in Current Biology on October 20 have found that wildfires, and specifically the 2018 Woolsey fire, are putting the LA mountain lions’ future in more doubt.

“We found that after a large fire, in a fragmented urban landscape, a population of mountain lions who were already at risk of extinction increased behaviors that would put them at risk of negative encounters with humans and other mountain lions,” said Rachel Blakey (@blakey_rachel) of the University of California, Los Angeles. “These risky behaviors indicate the ongoing negative effects of a large fire disturbance in a population already grappling with the multiple stressors of living within a megacity.”

Blakey admits to being starstruck by the LA mountain lions. She calls the mere fact that they exist in LA “miraculous.” When the Woolsey fire scorched about half of the mountain lion habitat in the Santa Monica mountains, Blakey and colleagues at the National Park Service and UCLA, including Seth Riley, Jeff Sikich, and Daniel Blumstein, wanted to know what it meant for the big cats.

To find out, the researchers used GPS location and accelerometer data for 17 mountain lions tracked both before and after the fire, part of a larger dataset collected by Riley and Sikich, who have been studying the population for over 20 years. And what they found isn’t encouraging.

After wildfire, mountain lions avoided burned areas, they report. They also more often put themselves at risk by crossing roads, including freeways. In the 15 months after the fire, they crossed roads five times a month on average compared to three times before the fire. Furthermore, their rate of crossing the 101, a busy 10-lane freeway, increased after the fire from once every two years to once every 4 months. They also started moving around more often during the day, a habit that makes them more likely to cross paths with people.

“The idea that mountain lions will run across freeways, rather than take their chances in urban areas, really reinforces how strongly mountain lions avoid humans,” Blakey said. “I think this is an important point, because people who live in the urban-wildland interface often worry that large disturbances like this could increase human-wildlife conflict.”

The findings show that wildfires are putting mountain lions at more risk as their habitat and resources have shrunk and they’re forced to take greater risks to get by. She notes that the findings highlight the increasing importance of connecting natural habitat in urban areas to help mountain lions and other wildlife access resources and breeding partners. The researchers are encouraged by the groundbreaking earlier this year of the Wallis Annenberg wildlife crossing, soon to be the largest wildlife crossing in the world.

“We are lucky that, thanks to decades of science by the National Park Service and tireless campaigning by the National Wildlife Federation, our mountain lion population in LA will soon receive a much-needed boost to their connectivity via the Wallis Annenberg wildlife crossing,” Blakey said.

The hope is that the new crossing will help support and maintain genetic diversity in a broad range of species, including mountain lions. Other important steps for protecting the LA mountain lions and the environment at large include reducing car use, increasing green space, and avoiding wildfires started by people.

Blakey says the new findings are “really the tip of the iceberg.” They plan to continue studying the mountain lions to find out what wildfire and other pressures will mean for the population’s survival. They’re already seeing losses of mountain lions from collisions with vehicles and—for reasons that aren’t yet entirely clear—more deaths attributed to pesticides used to kill rodents, which keep blood from clotting properly.

In collaboration with mountain lion ecologists across the state of California, the researchers are now also investigating how burn characteristics and human disturbance interact to influence the way mountain lions use burned landscapes. The hope is that what they find will help them “manage these landscapes for mountain lion resilience into the future,” Blakey says.

This work was funded by the La Kretz Center for California Conservation at UCLA and California State Parks. 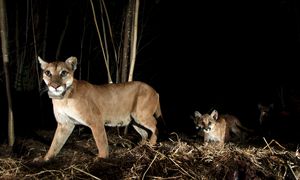 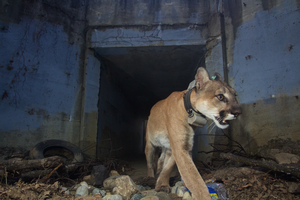