Fusion power generation uses the energy generated by fusion reactions in high-temperature plasma. To achieve this, it is necessary to precisely measure the fast-changing high-temperature plasma to understand and control the physical phenomena. A research group from the National Institute for Fusion Science in Japan and the University of Wisconsin in the United States have developed a high-performance laser device and succeeded in advancing a method to measure electron temperature and density in plasma at a world record speed of 20,000 times per second for almost 70 spatial points, more than 600 times faster than conventional methods. As a result, it is possible to study fast changes in plasma in detail, which has been difficult until now.

Galileo Galilei, a scientist active in Italy from the late 16th century, proposed the heliocentric theory through astronomical observations and scientific analysis based on them. The instrument that greatly contributed to his research was the telescope, the most advanced technology of the time. Galileo was convinced of the heliocentric theory, through detailed observation and study of the movement of stars, using this high-performance instrument. He also improved the performance of his telescope and discovered craters on the moon and the moons of Jupiter. It can be said that high-performance measurement technology was indispensable to Galileo's profound insights and new astronomical discoveries. Advanced measurement technology is similarly critical to fusion research.

In the Large Helical Device (LHD), research is conducted to confine the high-temperature plasma necessary for fusion power generation in a magnetic field. Plasma is a state in which electrons and ions are scattered and moving around, and the higher the temperature, the faster they move. To measure the temperature of these electrons, a technique called "Thomson scattering measurement" is used (Fig. 1). In this technique, a powerful laser beam is injected into the plasma and the "scattered light" generated when it strikes the electrons is measured. The scattered light changes to a different color to the incident laser light, due to the Doppler effect. Since this color change corresponds to the speed of the electrons, we can determine their temperature from the color of the scattered light and the electron density from its brightness.

The electron temperature and density of a plasma vary from place to place and change extremely fast with time. In order to accurately determine the plasma state, the Thomson scattering measurement system must have the spatial resolution to measure the spatial distribution of electron temperature and density as finely as possible, and the temporal resolution to measure changes in time as quickly as possible. The LHD Thomson scattering system simultaneously measures electron temperature and density at 144 points in the plasma. This is the world's top-level spatial resolution. Time variation is measured by repeatedly injecting pulses of laser light into the plasma, but previously the time resolution of the LHD Thomson scattering system was only 30 times per second. To deeply understand the physical phenomena we have seen and to make new discoveries, it has been necessary to improve the time resolution. In particular, faster measurement speeds enable detailed measurements of transient phenomena that occur in plasmas, thus providing a powerful method for understanding and controlling such phenomena.

Associate Professor Ryo Yasuhara, Assistant Professor Hisamichi Funaba, and Assistant Professor Hiyori Uehara of the National Institute for Fusion Science, together with Professor Daniel J. den Hartog of the University of Wisconsin, have developed a Thomson scattering measurement system capable of measuring at up to 20 kHz (20,000 times per second). The heart of the new measurement system is a laser device that can generate intense light many times over at high speed. In this laser system, a laser medium (in the case of this research, a solid medium) is given optical energy (excitation light) to generate a powerful laser beam. However, because the laser beam generation efficiency is not 100%, the energy that is not converted into laser light becomes heat. Therefore, heat generation in the solid medium becomes a problem at high laser repetition rates. When a temperature difference is created in the medium due to heat generation, a thermo-optic effect appears, in which light cannot travel straight ahead because the refractive index of light differs from place to place. The thermo-optic effect can cause a reduction in the output power of the laser light and damage to the solid medium. The research group avoided the problem of thermo-optic effects by applying energy to the medium and extracting the laser pulse from the medium multiple times in the extremely short time period of 5 ms, before a temperature difference occurred in the medium (Fig. 2). As a result, they succeeded in developing a laser capable of a high-speed repetition rate of 20 kHz. This high-performance laser, a newly developed high-speed data acquisition system, and advanced analysis methods developed so far have enabled them to achieve a Thomson scattering measurement system capable of calculating at a world record speed of 20 kHz, more than 600 times faster than conventional systems (Fig. 3).

Associate Professor Yasuhara says, "Just as Galileo achieved important astronomical discoveries with the use of a high-performance telescope, I would like to further develop fusion research by introducing fast electron temperature and density profiles. We expect that this will lead to a more precise understanding of physical phenomena that have been difficult to observe in the past, such as fueling into plasmas and transient phenomena caused by turbulence."

A paper summarizing some of the results of this research was published online in Scientific Reports on September 6. The professor will also give an oral presentation at the Laser Congress 2022 (hosted by Optica), an international conference on advanced laser research, to be held in Barcelona, Spain, from December 11 to 15, 2022. 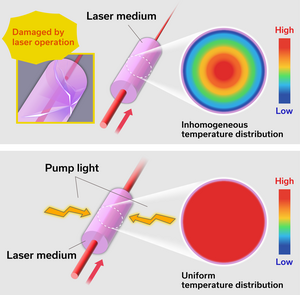 Fig. 2 Principle of operation of the developed high-repetition laser system 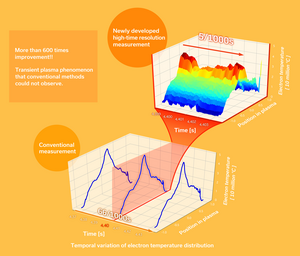