Eating fire ants might prepare a lizard’s immune system to be stung by the ants, according to a new study by researchers at Penn State. The study comprehensively assessed how the immune system responds to lizards eating and being stung by these ants and might help researchers understand how other native species respond and adapt to the invasive insects.

Fire ants are an invasive pest species in the southeastern United States that are expanding their range as the climate warms. When they sting, they inject venom that triggers an immune response in a wide variety of species, from humans to livestock to lizards. In eastern fence lizards—which also occur throughout the region—repeated stinging can cause paralysis and even death. Nonetheless, lizards often eat fire ants, in addition to other ant species.

"We know that lizards from areas with fire ants have different immune profiles than lizards in areas without them," said Tracy Langkilde, professor of biology at Penn State and leader of the research team. "Because the immune system is so critical for survival, we wanted to determine if these differences in immune profiles can be directly attributed to lizards frequently being stung by fire ants, eating fire ants, or something else.”

The researchers investigated six immune measures in response to three weeks of lizards either being fed dead fire ants or being stung by fire ants three times per week.

“We conducted a comprehensive assessment of most branches of the immune system, including measures of the innate immune system—resources that an individual is born with—and the adaptive immune system, which develops immune resources after exposure to a foreign substance like an infection or vaccine,” said Catherine Tylan, graduate student at Penn State who led the research. “This allowed us to see how different immune resources are allocated in response to fire ant exposure.”

The researchers present their results in a paper appearing online Oct. 14 in the journal Biological Invasions.

When lizards were fed fire ants, three immune measures were enhanced in comparison to lizards that were stung. The researchers observed an elevation in a type of white blood cells called basophils; an increase in complement activity, which helps or “complements” antibodies and other aspects of the immune system; and an increase in a type of immunoglobulin antibody (IgM) known to be reactive to fire ant venom.

“All three of these immune aspects are expected to help lizards survive a fire ant attack,” said Tylan. “For example, the fire ant-specific antibodies and complement could help bind up venom so it can no longer negatively impact the body. It’s possible that exposure to fire ant venom from the consumed fire ants stimulates an increased immune response, acting somewhat like a vaccine. So, eating fire ants may incidentally help lizards prepare for future venom exposure from stings.”

The researchers said that these results can also help explain immune patterns they observe in lizards in the field.

“Lizards caught from areas with fire ants have higher anti-fire ant antibodies and basophils than lizards from areas without fire ants,” said Tylan. “This study showed these same immune responses when lizards were fed fire ants, suggesting that the difference in these two immune measures in the field may be a result of lizards eating fire ants.”

“Together, these results help us understand the potential health-relevant consequences of exposure to invasive species,” said Langkilde. “Interestingly, our results suggest that native animals may be able to offset immune consequences of venom exposure by consuming these same species.”

In addition to Langkilde and Tylan, the research team at Penn State includes Heather Engler, research assistant in biology, and Gabriel Villar, postdoctoral researcher in entomology at the time of the research. This research was funded in part by the National Science Foundation.

Consumption of fire ants, an invasive predator and prey of native lizards, may enhance immune functions needed to combat envenomation 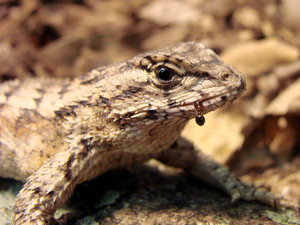