A big part of evolution is competition-- when there are limited resources to go around, plants and animals have to duke it out for nutrients, mates, and places to live. That means that the flower-covered meadows of China’s Hengduan mountains were an evolutionary mystery-- there are dozens of species of closely-related rhododendrons that all live in harmony. To figure out why, scientists spent a summer carefully documenting the flowering patterns of 34 Rhododendron species, and they discovered the reason why the plants were able to coexist: they burst into bloom at different points in the season so they don’t have to compete for pollinators.

“There’s this basic idea in ecology of the niche, that a species’s lifestyle, like what it eats and how it fits into the environment, cannot be replicated in the same community. If two species with the same lifestyle are living in the same space, they’ll compete with each other, so either one or both of them will adapt to have different, non-overlapping lifestyles, or they’ll go extinct,” says Rick Ree, a curator at the Field Museum in Chicago and senior author of the new study in the Journal of Ecology. “Since there are so many closely-related species of rhododendrons all living together in these mountains, we wanted to figure out how they were able to co-exist.”

Rhododendrons are flowering shrubs; you’ve probably seen some species (like azaleas) for sale at the garden center. The Hengduan Mountains, adjacent to the Qinghai-Tibet Plateau, are what biologists call a biodiversity hotspot: an ecologically fragile place with unusually high numbers of different species. “They form thickets along the sides of the mountains, it looks like an ocean of flowers,” says Qin Li, a postdoctoral researcher at the Field Museum and the paper’s lead author.

“The Rhododendron diversity in this area is caused in part by speciation, which is when new species diverge from a common ancestor,” says Ree. “Newly diverged species are expected to be much more ecologically similar, with the same sort of lifestyles, than species that are more distantly related.” That means that the closely-related rhododendrons in the Hengduan Mountains should be even likelier to compete with each other for resources.

When plants are in competition with each other, there are lots of ways they can adapt so that they can co-exist. “They can become very different in terms of their preferences for soil, light, and moisture, very basic physiological functional traits. They can also evolve differences to reduce this potential for cross pollination or competing for pollinators. That would be manifested through differences in flower shape, size, or color, or could be manifested in when they make their flowers available for pollinators,” says Ree. “By partitioning that timeline, they can reduce their chances of wasting their pollen and the resources that go into reproduction.”

All of these evolutionary strategies were on the table to explain why the rhododendrons hadn’t driven each other to extinction. To figure out which one was happening,  Li led a two-month fieldwork expedition to China’s Mount Gongga, chosen as her study area for a detailed survey after a four-month trip on Rhododendron the year before across the broader Hengduan Mountains.

“I’d never done fieldwork in southwestern China before, but we were actually pretty close to my hometown in Sichuan province,” says Li. “With my field assistant and co-author Ji Wang from Sichuan University, I spent more than two months going to more than 100 sites, and we visited each of these sites four times throughout the season.” After months of documenting the plants’ ecological characteristics, including the size and shape of leaves and flowers  and dates when the plants were blossoming, Li and her colleagues analyzed the data, using statistical approaches to find trends. They determined that the key factor in allowing the plants to co-exist was that they all flower at different times.

“Going in, we had a hunch that timing would be important, but we weren’t super certain,” says Ree. “It’s kind of conspicuous that there’s a long season where you can see flowers in the Himalaya region-- there are some species that put out striking blossoms against a backdrop of a field of snow, and others that wait till the end of the summer. Our analysis of the data confirms that suspicion.”

The study’s findings help illuminate one of many ways that plants can diversify without driving each other to extinction. But the confirmation that timing is key to Mount Gongga’s Rhododendron diversity also means that the climate crisis poses an extra threat to these plants.

“There’s abundant evidence that the pace of climate change is messing with plants’ flowering times, causing population declines and extinctions,” says Ree. “The question is, how are plant communities around the globe going to respond? Weather is part of what signals them to blossom, and since climate change affects the weather, it’s likely to shift that competitive landscape. When the environment changes, species have three choices: you move, you adapt, or you die. Climate change is accelerating that dynamic.” 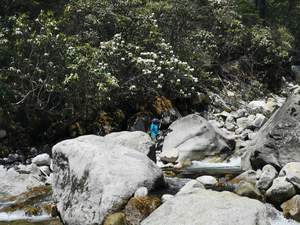