Scientific breakthrough: a joint study by TAU and the Hebrew University, involving 20 researchers from different countries and disciplines, has accurately dated 21 destruction layers at 17 archaeological sites in Israel by reconstructing the direction and/or intensity of the earth's magnetic field recorded in burnt remnants. The new data verify the Biblical accounts of the Egyptian, Aramean, Assyrian, and Babylonian military campaigns against the Kingdoms of Israel and Judah.

Findings indicate, for example, that the army of Hazael, King of Aram-Damascus, was responsible for the destruction of several cities - Tel Rehov, Tel Zayit, and Horvat Tevet, in addition to Gath of the Philistines, whose destruction is noted in the Hebrew Bible. At the same time, the study refutes the prevailing theory that Hazael was the conqueror who destroyed Tel Beth-Shean. Other geomagnetic findings reveal that the cities in the Negev were destroyed by the Edomites, who took advantage of the destruction of Jerusalem and the Kingdom of Judah by the Babylonians.

The groundbreaking interdisciplinary study was published in PNAS (Proceedings of the National Academy of Sciences of the USA) and is based on the doctoral thesis of Yoav Vaknin, supervised by Prof. Erez Ben-Yosef and Prof. Oded Lipschits of TAU's Institute of Archaeology and Prof. Ron Shaar from the Institute of Earth Sciences at the Hebrew University.

The researchers explain that geophysicists, attempting to understand the mechanism of earth's magnetic field, track changes in this field throughout history. To this end they use archaeological findings containing magnetic minerals which, when heated or burned, record the magnetic field at the time of the fire. Thus, in a 2020 study, researchers reconstructed the magnetic field as it was on the 9th of the month of Av, 586 BCE, the Hebrew date of the destruction of the First Temple and the City of Jerusalem by Nebuchadnezzar and his Babylonian army. Now, using archaeological findings unearthed over several decades at 17 sites throughout Israel, alongside historical information from ancient inscriptions and Biblical accounts, the researchers were able to reconstruct the magnetic fields recorded in 21 destruction layers. They used the data to develop a reliable new scientific tool for archaeological dating.

Yoav Vaknin explains: "Based on the similarity or difference in intensity and direction of the magnetic field, we can either corroborate or disprove hypotheses claiming that specific sites were burned during the same military campaign. Moreover, we have constructed a variation curve of field intensity over time which can serve as a scientific dating tool, similar to the radiocarbon dating method."

One example given by the researchers is the destruction of Gath of the Philistines (identified today as Tel Tzafit in the Judean foothills) by Hazael, King of Aram-Damascus. Various dating methods have placed this event at around 830 BCE, but were unable to verify that Hazael was also responsible for the destruction of Tel Rehov, Tel Zayit and Horvat Tevet. Now the new study, identifying full statistical synchronization between the magnetic fields recorded at all of these four sites at the time of destruction, makes a very strong case for their destruction during the same campaign.  A destruction level at Tel Beth-Shean, on the other hand, recording a totally different magnetic field, refutes the prevailing hypothesis that it too was destroyed by Hazael. Instead, the magnetic data from Beth-Shean indicate that this city, along with two other sites in northern Israel, was probably destroyed 70-100 years earlier, a date which could correspond with the military campaign of the Egyptian Pharaoh Shoshenq. Shoshenq's campaign is described in the Hebrew Bible and in an inscription on a wall of the Temple of Amun in Karnak, Egypt, which mentions Beth-Shean as one of his conquests.

One of the most interesting findings revealed by the new dating method has to do with the end of the Kingdom of Judah. Prof. Erez Ben Yosef: "The last days of the Kingdom of Judah are widely debated. Some researchers, relying on archaeological evidence, argue that Judah was not completely destroyed by the Babylonians. While Jerusalem and frontier cities in the Judean foothills ceased to exist, other towns in the Negev, the southern Judean Mountains and the southern Judean foothills remained almost unaffected. Now, the magnetic results support this hypothesis, indicating that the Babylonians were not solely responsible for Judah's ultimate demise. Several decades after they had destroyed Jerusalem and the First Temple, sites in the Negev, which had survived the Babylonian campaign, were destroyed – probably by the Edomites who took advantage of the fall of Jerusalem. This betrayal and participation in the destruction of the surviving cities may explain why the Hebrew Bible expresses so much hatred for the Edomites - for example, in the prophecy of Obadiah."

Prof. Oded Lipschits adds: "The new dating tool is unique because it is based on geomagnetic data from sites, whose exact destruction dates are known from historical sources. By combining precise historical information with advanced, comprehensive archaeological research, we were able to base the magnetic method on reliably anchored chronology."

A separate paper, presenting the scientific principles of the novel archaeomagnetic dating method, is in preparation. Prof. Ron Shaar, who led the geophysical aspects of the study, as well as the development of the geomagnetic dating method, explains: "Earth's magnetic field is critical to our existence. Most people don't realize that without it there could be no life on earth - since it shields us from cosmic radiation and the solar wind. In addition, both humans and animals use it to navigate. The geomagnetic field is generated by earth's outer core, at a depth of 2,900 km, by currents of liquid iron. Due to the chaotic motion of this iron, the magnetic field changes over time. Until recently scientists believed that it remains quite stable for decades, but archaeomagnetic research has contradicted this assumption by revealing some extreme and unpredictable changes in antiquity. Our location here in Israel is uniquely conducive to archaeomagnetic research, due to an abundance of well-dated archaeological findings. Over the past decade we have reconstructed magnetic fields recorded by hundreds of archaeological items. By combining this dataset with the data from Yoav’s investigation of historical destruction layers we were able to form a continuous variation curve showing rapid, sharp changes in the geomagnetic field. This is wonderful news, both for archaeologists who can now use geomagnetic data to determine the age of ancient materials and for geophysicists studying the earth's core." 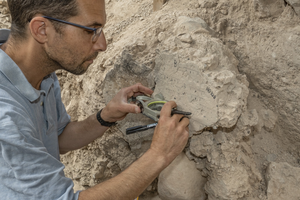 Yoav Vaknin measuring at the site. 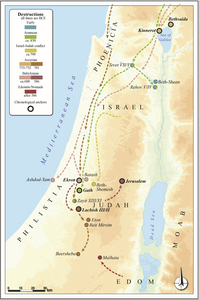 Map of the studied destruction layers and the different military campaigns. 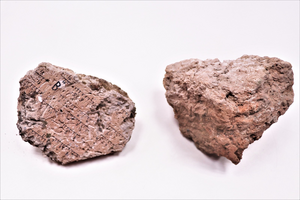 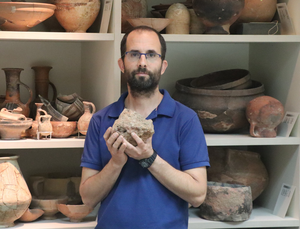 Yoav Vaknin explaining about the research