An unexpected river under the Antarctic ice sheet affects the flow and melting of ice, potentially accelerating ice loss as the climate warms.

The 460km-long river is revealed in a new study, which details how it collects water at the base of the Antarctic ice sheet from an area the size of Germany and France combined. Its discovery shows the base of the ice sheet has more active water flow than previously thought, which could make it more susceptible to changes in climate.

The discovery was made by researchers at Imperial College London, the University of Waterloo, Canada, Universiti Malaysia Terengganu, and Newcastle University, with the details published today in Nature Geoscience.

Co-author Professor Martin Siegert, from the Grantham Institute at Imperial College London, said: “When we first discovered lakes beneath the Antarctic ice a couple of decades ago, we thought they were isolated from each other. Now we are starting to understand there are whole systems down there, interconnected by vast river networks, just as they might be if there weren’t thousands of metres of ice on top of them.

“The region where this study is based holds enough ice to raise the sea level globally by 4.3m. How much of this ice melts, and how quickly, is linked to how slippery the base of the ice is. The newly discovered river system could strongly influence this process.”

Water can appear beneath ice sheets in two main ways: from surface meltwater running down through deep crevasses, or by melting at the base, caused by the natural heat of the Earth and friction as the ice moves over land.

However, the ice sheets around the north and south poles have different characteristics. In Greenland, the surface experiences strong melting over the summer months, where immense amounts of water channel down through deep crevasses called moulins.

In Antarctica, however, the surface doesn’t melt in sufficient quantities to create moulins, as the summers are still too cold. It was thought this meant that there was relatively little water at the base of the Antarctic ice sheets.

The new discovery turns this idea on its head, showing there is sufficient water from basal melt alone to create huge river systems under kilometres-thick ice.

The discovery was made through a combination of airborne radar surveys that allow researchers to look beneath the ice and modelling of the ice sheet hydrology. The team focussed on a largely inaccessible and understudied area that includes ice from both the East and West Antarctic Ice Sheets and reaches the Weddell Sea.

That such a large system could be undiscovered until now is testament to how much we still need to learn about the continent, says lead researcher Dr Christine Dow from the University of Waterloo.

She said: “From satellite measurements we know which regions of Antarctica are losing ice, and how much, but we don’t necessarily know why. This discovery could be a missing link in our models. We could be hugely underestimating how quickly the system will melt by not accounting for the influence of these river systems.

“Only by knowing why ice is being lost can we make models and predictions of how the ice will react in the future under further global heating, and how much this could raise global sea levels.”

For example, the newly discovered river emerges into the sea beneath a floating ice shelf – where a glacier extending out from the land is buoyant enough to begin floating on the ocean water. The freshwater from the river however churns up warmer water towards the bottom of the ice shelf, melting it from below.

Co-author Dr Neil Ross, from the University of Newcastle, said: “Previous studies have looked at the interaction between the edges of ice sheets and ocean water to determine what melting looks like. However, the discovery of a river that reaches hundreds of kilometres inland driving some of these processes shows that we cannot understand the ice melt fully without considering the whole system: ice sheet, ocean, and freshwater.”

The existence of large under-ice rivers also needs to be taken into account when predicting the possible consequences of climate change in the region. For example, if summers warm enough to cause enough surface melt that the water reaches the base of the ice sheet, it could have large effects on the river systems, potentially tipping Antarctica to a Greenland-like state, where ice loss is much faster.

There are also potential feedback loops that would accelerate ice loss. For example, if the ice starts to flow faster as water accumulated at the base, then this will increase friction where the ice runs over dry land, which could increase the amount of basal melting and water produced.

The team are now looking to gather more data about all these mechanisms from surveys to apply their models to other regions and provide a better understanding of how a changing Antarctica could change the planet. 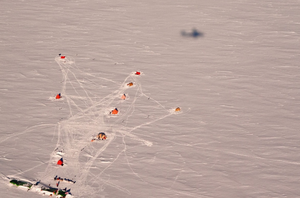